WhatCulture Pro Wrestling have announced the brackets for the Scottish qualifier in the WCPW Pro Wrestling World Cup. The event is due to take place in Motherwell on March 23rd in association with Scottish Wrestling Alliance. Let’s take a look at the four matches announced: 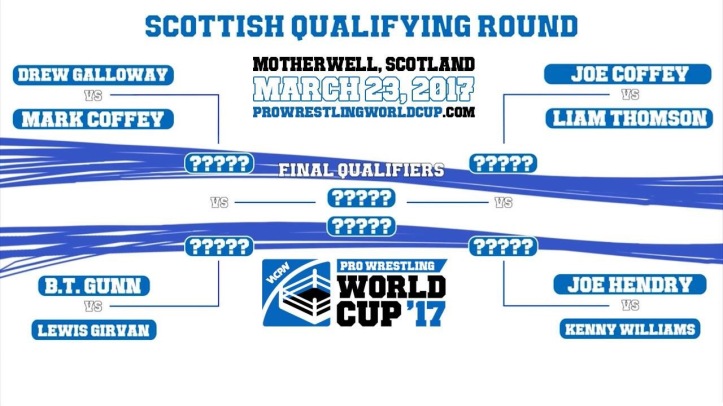 Two former Scottish Heavyweight Champions, Drew Galloway being the more big match experienced of the two having wrestled all over the world and holding titles just about everywhere he has been. As the current WhatCulture Pro Wrestling Heavyweight Champion, Galloway will have a lot of pressure to represent, not only his country, but the company as the guy that holds the top title in WCPW.

Another match with two vastly experienced individuals. Joe Coffey is quite possibly the best wrestler in Scotland right now and faces possibly one of the most underrated in ‘Bad Boy’ Liam Thomson. Put this down as the dark horse to be the match of the night.

‘The Oddity’ and ‘The Best Young Wrestler’, their paths have rarely crossed with one prior meeting coming to mind when Girvan defeated Gunn in Edinburgh in an outstanding match. This will be one to watch with these two trying to twist, snap, chop and kick their way to victory.

These two have been the best of friends and the best of enemies over the years, Joe Hendry has been tearing it up in WCPW so it would be difficult to look past Hendry being a favourite in this tournament. Kenny Williams though isn’t a stranger to facing bigger competitors and walking away with his arm raised.

Four fantastic matches which leads to many mouthwatering prospective next round matches before finally settling which two will come out of the Scottish qualifier and representating Scotland in the Pro Wrestling World Cup. All eight men are deserving, all eight would represent our country excellently and I couldn’t begin to pick winners of this one.

Which match are you looking forward to and which two do you think will come out as representing Scotland? Comment below!