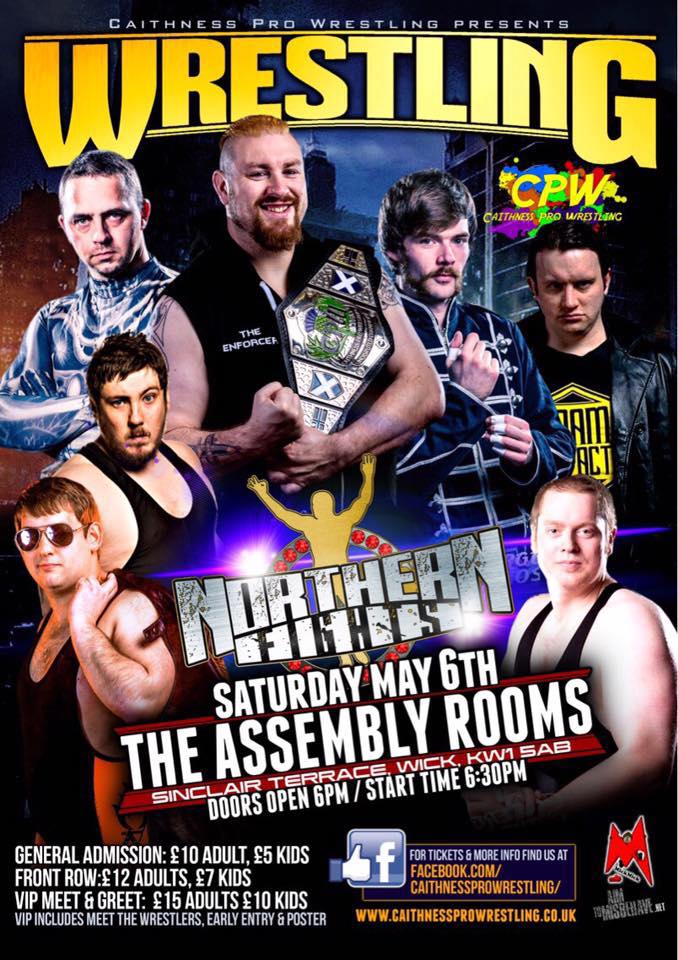 Venturing to the YouTubes, let's take a look at Caithness Pro Wrestling's Northern Fights event which took place in Wick earlier this year on May 6th.

The show kicked off with Christopher Saynt antagonising the crowd. He announced that the newest member of the House of Saynt was Kitty Trouble who entered sporting a House of Saynt shirt. Saynt moved onto his opponent Big Bob and was soon interrupted by 'The Tartan Mountain' himself. Big Bob challenged Saynt to get into the ring. He obliged after much protesting.

As soon as the bell rung Saynt was out of the ring and taking his sweet time to actually get into the match. Using the ten count to his advantage to waste as much time as possible before Big Bob brought him into the ring the hard way. Saynt was then met with the strength of Big Bob first hand as he was sent flying from an errant shoulder tackle. After Saynt finally re-entered the ring it wasn't long before Bob had land a Scottish Mist chokeslam but a distraction from Kitty Trouble allowed Saynt to recover, low blow Big Bob and hit a superkick for the three count. Not much happened but the crowd were loud for it throughout.

A colourful comedy wrestler against a zombie girl, Lily used screams to stop Mr E in his tracks after her attempts to shoulder block Mr E failed to make the larger competitor budge. Lily finally took down with a headscissors and took control with a barrage of attacks in the corner before throwing him down for a leg drop and senton for a two count. Mr E fought back with an E-Plex, which was the strangest suplex variant that I may've ever witnessed. Lily Arkham hit two sentons and a Diamond Dust for the victory. A lot of stalling, the spike that Mr E had from the Diamond Dust was a beauty though.

Aurora offered Kitty Trouble a hug which Trouble wasn't that keen for. After a flurry from Aurora, Kitty took control but a double clothesline saw them both down which allowed Aurora to build up some momentum with a couple clotheslines and an uppercut to the back of Trouble's head, a follow up elbow drop scored a two count. A spinout stunner from Aurora was countered into a facebuster, Aurora went and hit the spinout stunner but Saynt pulled the referee out of the ring for the disqualification. Saynt grabbed Aurora but Big Bob entered to send The House of Saynt scarpering. A slow match, with Saynt's involvement being the highlight.

The larger Impact relied on power over the smaller and quicker Redstar. Redstar fought with some nice armdrags but was thrown about by Impact who attempted to remove the mask of Redstar. Impact hit a front slam but an Impact Buster was countered into a flatliner for the surprise victory. The finish came out of nowhere but the action beforehand was solid.

Lad Chapman laid out an open challenge to anyone on the roster. Lily Arkham answered the challenge but not for herself but for Caleb. The much larger Caleb swatted Chapman off with ease but Chapman fought back with a missile dropkick but a sleeper was countered by Caleb who followed up with a World's Strongest Slam for the win. After the match Caleb hit a big splash on Chapman. Very little to write about, Lad Chapman got battered.

Started off with both showing their power by being able to push the other over with relative ease out of the lock up. Arkham targeted the arm of Necro, wrenching on the arm including a finger snap to send Necro scurrying into the corner. Necro countered a corner attack and hit a Finlay Roll for a two count. Necro took control with some hard forearms and a neckbreaker to add further punishment. After the neckbreaker, Necro went for a neck crank into a sleeper. Arkham fought out of it and countered a charge into the corner with a front dropkick. Arkham his a lovely Black Magic for a two count before Necro regain control with a Samoan Drop. Necro got distracted by his own skull which Arkham took advantage of with a Lobotomy DDT. Adam Impact entered to distract Arkham which allowed Necro to hit a low blow and a fireman's carry to a neckbreaker for the victory. Arkham choked Necro out after the match and and attacked his arm leaving Necro screaming in pain. This match had a story, both mean had a body part to target, Arkham with the arm and Necro with the neck. Both played a part with Necro hitting a neckbreaker to win and Arkham trapping Necro's left arm and cranked the right arm with such viciousness. Really good match with a story throughout.

Bobby Roberts used his weight advantage to overpower Rose in the early going, Rose fought back and hit a Dangerball into the corner and followed up with an airplane spin that was countered into a DDT. A chop trade-off rocked Roberts who was slammed with a Michinoku Driver for a two count. Rose wasn't done with two Dangerous Elbow Drops and a third from the second rope. It wasn't enough as Roberts smashed Rose with a lariat for another close two count. A Bobby Roberts spear was dodged and an uranagi was two count for Rose, a stunner from Roberts wasn't enough. A powerbomb attempt was countered as Roberts adjusted to turn it into a sunset flip, Rose dropped and got the three count and the CPW Undisputed Championship. After a celebration, Roberts hit Rose with a superkick then unleashed an attack on the new champion including a Beefy Bomb. Lad Chapman entered to make the save but was speared and stunnered for his troubles. Roberts followed up with shaving the mustache of Lad Chapman. Roberts declared CPW as the house that Bobby Roberts built as the show came to an end. A fun main event with a surprise title change.

Overall: This is the first CPW show I have watched in its entirety. Let's look at some positives, Necro vs Eric Arkham was a really good match, the inclusion of Christopher Saynt always makes for some entertainment, the main event was interesting with a title change, the crowd just didn't stop shouting for the whole show and there was always some noise. There was a lot of matches where very little happened and a couple had finishes that just happened with very little build up.

This show is free to watch on YouTube. You can watch it below: