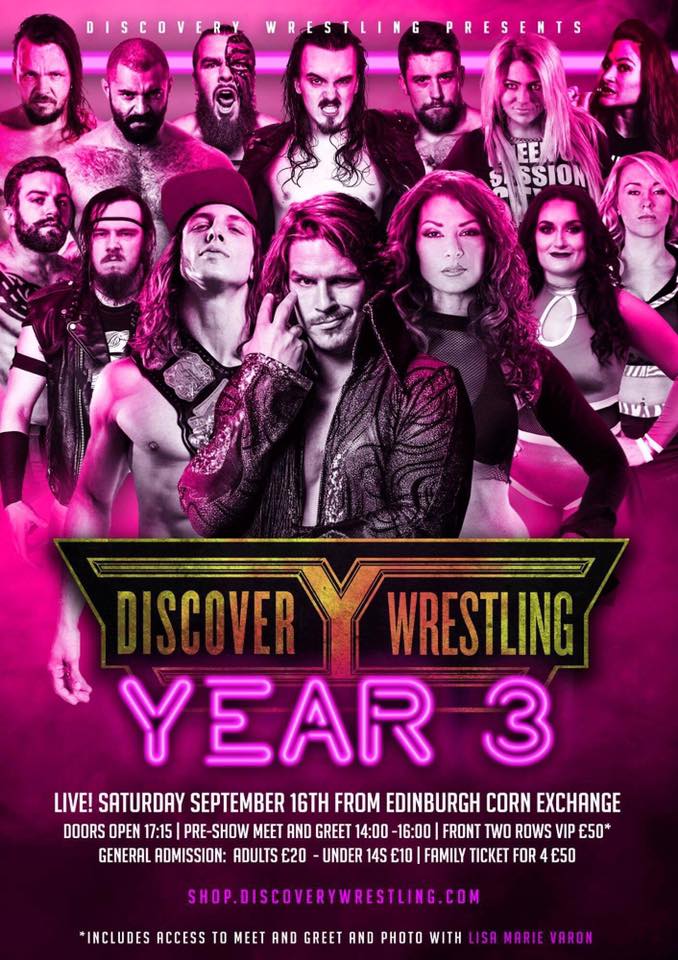 Discovery Wrestling returned after the summer break for their huge anniversary show at one of their regular venues, The Corn Exchange in Edinburgh. This show was announced last year and Discovery had certainly pulled out all the stops with Dalton Castle, Matt Riddle, Lisa Marie Varon (Victoria/Tara in WWE/TNA), Joe Coffey, Joe Hendry, The NAK and Michael Chase, only some of the wrestlers scheduled to appear. Did the show live up to expectations? I’m pleased to say it did. Ten matches in all including an eight match main show card Discovery’s biggest yet, so let’s get to it.

Pre-show meet and greet was with Lisa Marie Varon and Dalton Castle, sadly I couldn’t get there on time for this but I heard they were both happy to chat and pose for photos which was great. Pre-show matches were Rob Cage defeating Liam Slater and The Amazon Ayesha Raymond defeating Debbie Sharpe to become number one contender for the Woman’s Championship.

I can’t help but feel the one on one match between Saynt and Chase should have been at this show, but Discovery set up this six person match where Chase got the one on one match if his team won. Chase and Sharp’s partner had been advertised as a mystery, Sharp got on the mic and said that he was sorry that The Undertaker couldn’t make it (lol), but Chase soon revealed the mystery person was Lisa Marie Varon. Great bonus for the live crowd as she had only been advertised for the meet and greet and to present the Woman’s Title. She hasn’t lost a step and was a successful addition to the match. Crowd were really into this one as the opener and Chases team were able to secure the victory and his one on one opportunity at Saynt in November.

Aspen Faith has really been a standout performer in Scotland this year receiving a push in several promotions including Discovery. Ridgeway I have seen less of, so it was good to see him wrestle again and he was very impressive in his opening match in this tournament.

Very interesting result I thought in this match given what ended up happening in the main event. Aspen Faith is now one match away from earning a shot at the Y Division Title, I wonder if this will mean coming up against his tag team partner Lewis Girvan somewhere down the line should he win the final. Don’t think we have seen the last of Ridgeway in Discovery either. Straight away after this was:

Excellent idea to have one Semi Final match follow the other as it wouldn’t confuse the crowd later on in the card. Whiplash is well known to Discovery fans for his match of the year contender with Matt Riddle in May. Rampage is one of the best big guy wrestlers in the UK. I must admit I’d actually gone for a Whiplash vs Ridgeway final when asked for a prediction for this so I was completely wrong. These two went blow for blow but Rampage’s power won through in the end. So at The Jam House it will be Aspen Faith vs Rampage Brown in the tournament final and what is effectively now a number one contenders match for the Y Division Title.

The match was stopped due to injury to Lucy Cole. I’d like to commend Discovery as to how they handled this situation, the ref immediately stopped the match when he realised the injury and the first concern, as it should be in this instance, was for the wrestlers well being. The crowd were asked to wait outside while Lucy received medical attention and Discovery kept us up to date on what was happening. Thankfully they were able to let us know the injury wasn’t as bad as feared and, as we all do, wish Lucy a speedy recovery.

After the interval came the final qualifier for the fatal four way to decide the first tag team champions in November. Originally this was meant to just be a one on one match between two teams but it had been announced before the show that three teams, The Kings of the North, The NAK, and Polo Promotions had entered so it was decided to make it a triple threat. The NAK and Polo Promotions are very familiar to Scottish Fans but The Kings of The North, Damien Corvin and Bonesaw, perhaps less so, in fact it was my first time seeing them in action. Very hard hitting action here as you would expect and the crowd were really into it. Polo Promotions were distracted long enough by Rob Cage and Nina Samuels to allow The NAK to pick up the win but credit goes to all six men, I would pay to see this one again.

I have to admit to not knowing a great deal about Dalton Castle, I hadn’t seen much of his work but his entrance in particular makes me want to see him again. It was so good that Discovery have actually made a photo of his entrance taken by Mr David Wilson their cover photo on their Facebook page. This is another import where I have to say well done to the company for bringing him in. Anyway he took on ‘The Local Hero’ Joe Hendry who has been developing quite a name for himself recently in WCPW and ICW. His entrance, with his own version of Castles in the Sky, was highly amusing too. Surprisingly the Edinburgh crowd seemed to favour Castle over their own man especially with Hendry using heelish tactics holding the tights (I think) for the win. I hope, like The Elite, we see Castle back in Discovery in the future.

Promotion co-owner Alan Smith came out to draw the raffle as usual and give his thanks to the fans for turning out in great numbers. He was then interrupted by Dave Conrad who complained that he wasn’t booked and reminded Alan what happened the last time that happened (He ended Big Damo’s Discovery career). Alan told him he did have a match as he was the opponent for the previously announced Matt Riddle.

I missed Riddle’s last match in Discovery against Whiplash and most report called it a MOTY candidate so I was pleased to see him here. Conrad has switched back and forth from singles and tag action this year. I can’t help but feel that Conrad would benefit from a proper program with someone, like the Chase/Saynt feud, however, before that he is part of the tag team title finale with Deviation in November so he could be a champion soon. Riddle picked up the win here to the delight of the crowd.

After 666 days Lewis Girvan’s reign as champ came to an end as Coffey won the second and third falls to win the match two falls to one. This has been the main angle in the company for over a year and it was only right that it should come to a head in the main event of the company’s biggest show. Coffey has worked hard to secure his rematch even taking on Girvan’s tag team partner Aspen Faith in the process. After the pair shared the opening two falls Faith would get involved when the ref was down, however, he was eventually ejected from ringside. After several near falls and several submission attempts Coffey would finally capture the deciding fall and end his year long chase for the title. I, for one, can’t wait for his first title defence, it will be interesting to see if Girvan gets a rematch down the line.

Discovery have just announced the show will be available to watch online soon and I strongly urge anyone who wasn’t there to check it out. I think I’m right in saying it was the biggest card the company his put on in its 3 year history and it was well worth the £20 admission.

Plenty announced for the next show at the beginning of November already with the Disocvery debut of Pete Dunne, Tyler Bate and Trent Severn amongst the wrestlers confirmed and the crowning of the first ever tag champs. Details of the next show at Edinburgh’s Jam House can be found here: