GPWA are set to present their 3 year anniversary this Friday night from The Asylum in Glasgow, just two days before the historic ICW Fear & Loathing X. Ever since the first Night at the Asylum show back in February 2016, fans have been given a glimpse into the future of Scottish wrestling. Many of the trainees will be in action, along with some very special guests. 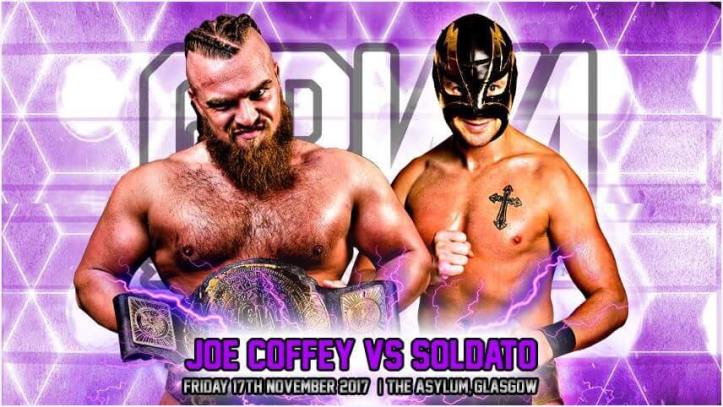 ICW’s reigning World Heavyweight Champion will be in action on Friday as Joe Coffey faces off against high flyer Soldato. This match, presented in association with RUDO Sports and Entertainment Brand, will see a real mix of styles with the power moves of Coffey compared to the aerial offence of Soldato. With a huge match just around the corner two days later for The Iron King, you could maybe class this as a warm-up match for the champ. But Joe can’t be taking Soldato lightly. One turn of the eye and Coffey will find himself lying flat on his back, a sight Red Lightning won’t want to be seeing with Fear & Loathing X just days away.

The leader of The Filthy Generation also makes his way to The Asylum as Stevie Boy faces Joe Hendry’s intern Leyton Buzzard. The Icon Killer has had a phenomenal 2017 but now he looks ahead to what is sure to be a brutal match at The Hydro as he enters The King of Insanity Deathmatch. Since being introduced as an assistant to The Prestigious One, Buzzard hasn’t done too much. If he impresses here, I see Hendry allowing him to come down the ramp alongside himself at The Hydro.

“The Bollocks” Kenny Williams is another man headed down to The Asylum on Friday, as he’s set to face off against Kez Evans. Williams isn’t getting a break this weekend, eh? Against Evans on Friday, the incredible El Ligero on Saturday and finally the legendary Rey Mysterio on Sunday. Although Kez may not be as accomplished as the other two opponents for Williams, but he can still put up a fight. If he’s able to pick up the win this Friday, especially on this particular weekend, then you can expect big things down the line for young Kez. 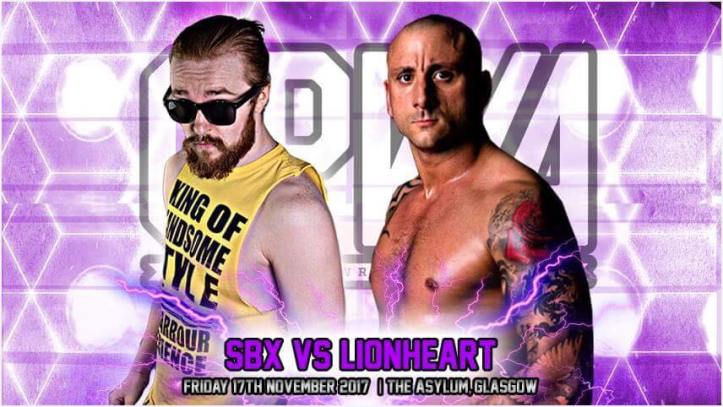 The Sam Barbour Experience vs Lionheart

You lucky fans! Those in attendance on Friday will get the chance to witness The Sam Barbour Experience going up against “The Dugfather” Lionheart. SBX has improved so much since debuting on the inaugural Night at the Asylum event and has earned bookings for companies such as Pro Wrestling Elite, owned by his opponent on Friday. Lionheart has become one of the most beloved faces in ICW over the last few months, having fantastic matches against the likes of Joseph Conners and Joe Hendry. With a huge match against Zack Gibson and the world-recognised Rob Van Dam at The Hydro, Lionheart will be looking to make a statement at the expense of Sam.

Tag team action is scheduled for The Asylum with Jackie Polo and Andy Wild set to face Aaron Echo and Kieran Kelly. With Polo’s original partner Mark Coffey unable to appear on Friday, Nature’s Gift to Wrestling has called upon Andy Wild to team with him. The last time we saw Aaron Echo and Kieran Kelly (then Kieran McColm) in The Asylum was part of the Asylum Invitational back in May, which was won by Echo. Polo and Echo both have huge matches at Fear & Loathing X, with Polo and Coffey set to face The Marauders for the Tag Team Championships and Echo due to take part in a Six Way #1 Contenders Ladder Match. What a weekend for these two.

A six man tag team match is also set to take place, as Jack Dillon and The Govan Team take on Paxxo and The Purge. Ravie Davie of The Govan Team is perhaps the most talked about graduate from The Asylum, with a huge opportunity awaiting him the next night at The Garage. If he’s able to defeat Bram, he’ll earn the right to compete at The Hydro. The Purge have also been making their name known, with appearances in ICW alongside Wolfgang as part of Bad Company. I’m sure there will be several opportunities down the line for these 6 men. 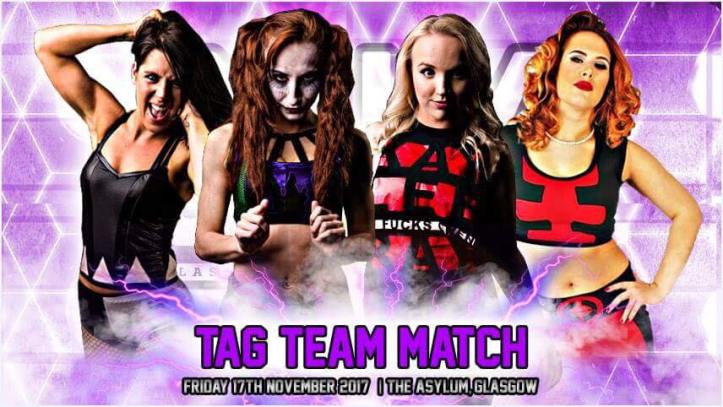 The final match signed sees a women’s tag match as Kasey and Jokey face off with Jamie Winters and Molly Spartan. Kasey has a huge night ahead on Sunday, as she’s set to enter a Triple Threat Steel Cage Match against Kay Lee Ray and Viper for the ICW Women’s Championship. Teaming with Legion’s Jokey on Friday night, the pair will be against Jamie Winters and Molly Spartan. Winters challenged Kasey for the Women’s Title back in August, coming out unsuccessful. Spartan and Kasey are no stranger to each other, having squared off on the first ever Night at the Asylum event. We could be looking at the future of Scottish women’s wrestling in this match.

Also set for Friday is a manifesto from Thatcher Wright. Will we finally hear about Margaret Thatcher or will someone else interrupt Wright?

GPWA will also be holding a special raffle on Friday. The winner will earn two passes to every GPWA show at The Asylum throughout 2018! Tickets are £3 each or two for £5.

Tickets are available now from www.eventbrite.co.uk, priced at £12 for seated tickets and £11 for standing tickets.