For the penultimate time this year, WrestleZone are bringing the action as they return to the Arbroath Community Centre this Saturday. With two new champions crowned in a matter of weeks, who knows what could happen as we approach 2018. 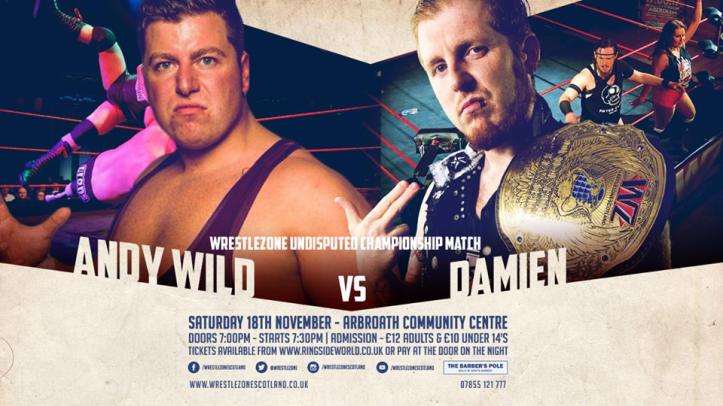 The main event for this show will see “The Revolutionary” Damien put his Undisputed Championship on the line against a former champion in the form of Andy Wild. After winning the gold from former Sterling Oil ally Shawn Johnson at October’s Halloween Hijinx event, Damien went on to retain the gold against “Vintage” Nathan North just days ago in Huntly in what I can imagine was a great match. Meanwhile, Andy Wild recently took part in a WWE tryout. The Englishman will be looking to ride off that momentum in Arbroath as he hopes to become a two-time Undisputed Champion.

The Tri-Counties Championship will also be up for grabs as new champion Zach Dynamite defends against Jason Reed. After 7 long hard years of work, “Fully Loaded” Zach Dynamite finally won gold as he defeated Aspen Faith this past Saturday in Huntly. Since returning from injury in the summer of 2016, Dynamite has been on a tear with wins over the likes of Shawn Johnson, Andy Wild and Nathan North. His first challenger is a man who has had a bit of a change in attitude as of late in Jason Reed. Reed also became champion this past weekend, as he won the W3L Heavyweight Championship. With his new outlook towards the fans and opponents, can Reed add more gold to put around his waist? 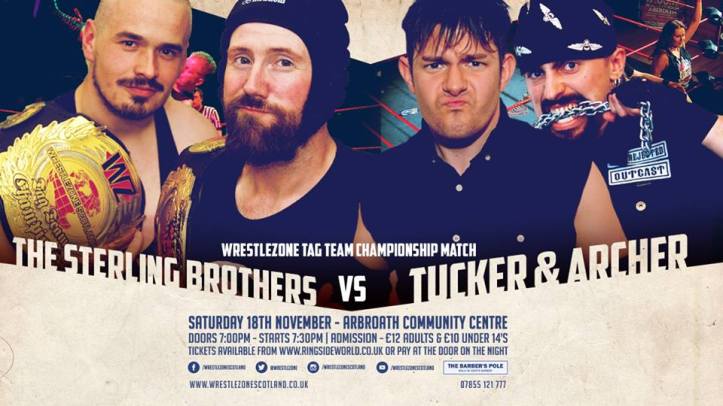 The third of WrestleZone’s three titles will be defended in Arbroath as The Sterling Brothers defend the Tag Team Championships against two men who are no stranger to holding the titles Bryan Tucker and Chris Archer. Since January’s Summerhill Showdown event, Alan and William have been going back and forth with The Rejected, who answered their Open Challenge that night to win the titles and become two-time champions. But after losing the straps back to Richard R. Russell’s men in an Anything Goes Match at Battle of the Nations, Archer’s tag partner Mikkey Vago was sidelined following a DDT on a steel chair. That won’t stop The Outcast trying to regain the tag titles though, as he’s recruited new ally and former four-time tag champ Bryan Tucker to challenge for the gold on Saturday. Will Tucker tie The Sterling Brothers for most reigns with the Tag Team Championships or will it be another sterling night for Richard R. Russell? 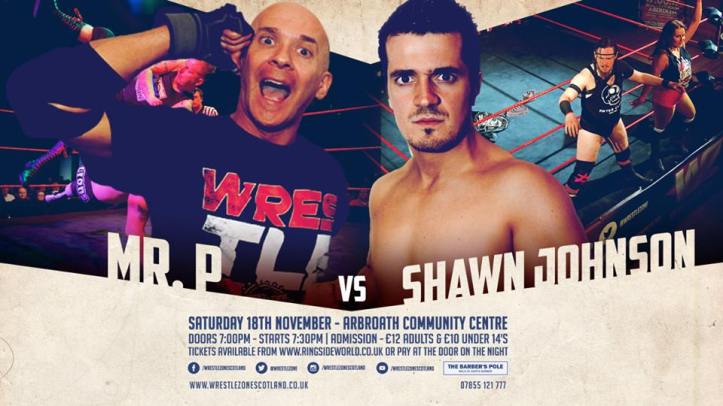 Mr P will be in action on Saturday against a man who will be making his first appearance since losing the Undisputed Title to Damien, Shawn Johnson. We’ve yet to hear from Johnson since he lost the gold last month, but you’d have to imagine he’s going to take out his frustrations on Mr P. Speaking of P, he recently lost to new rival “Vintage” Nathan North last month, who then proceeded to steal the Scottish flag that P proud waves around. It’s all about redemption this Saturday when these two face off.

In a rematch from Huntly a few days ago, Sterling Oil’s monster Crusher Craib will again face off with “Tenacious” Johnny Lions. With Craib picking up the win this past Saturday following a slip on the ropes from Lions, it extended his undefeated streak over The Tenacious One to 6-0. Since returning at Aberdeen Anarchy back in June, The Creator of Carnage has yet to be pinned. With both men being former two-time Undisputed Champions, you’d have to imagine they’ll be looking towards maybe becoming three-time champions down the line.

Bradley Evans vs The Super Executioner

The last match signed sees a match originally scheduled for the Huntly show this past Saturday, as Bradley Evans is set to face off against The Super Executioner. After being sidelined with a concussion at the hands of Aspen Faith back at Halloween Hijinx, Evans was forced to sit on the sidelines in Huntly, although he was able to support Zach Dynamite in his successful Tri-Counties Championship quest (which you can view here). Speaking of that title, a more than rightful challenger is The Super Executioner. Executioner is a man who holds victories over the likes of then-Undisputed Champion Scotty Swift and a man who has disappeared from WrestleZone in Lord Mr Malice. With Evans being so close to the new champion, you’d imagine he’ll be getting a crack at the title in the very near future.

Tickets for the show are available from www.ringsideworld.co.uk, priced £12 for adults and £10 for under 14s. Fans can also pay at the door on the night. Doors at the Arbroath Community Centre open at 7pm, with the action scheduled to get underway at 7:30.