On this edition, Stone Malone answers our questions. 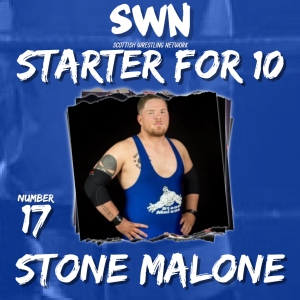 My friends talked about it in nursery so I decided to see what the fuss was about. The moment I saw Hardcore Holly hit The Big Show with a steel chair, I became a fan instantly.

My favourites growing up were Stone Cold Steve Austin, The Undertaker, John Cena, and Rey Mysterio. Some of my favourites right now are Drew McIntyre, Seth Rollins, Adam Cole, Ricochet, and AJ Styles.

It’s always something I thought of doing when I was younger. When I went to a show in Airdrie, I heard there was a wrestling school there so I went to see what it was like, and I don’t regret it at all.

As a fan, I’d probably say Drew McIntyre and AJ Styles. Watching them through the years to see where they’re at today is truly inspiring. As a wrestler, I’d say my coach TJ Rage, most of the boys and girls I train alongside and my mum and dad, Mama and Papa Stone.

So far I’d say my favourite opponent has been Dickie Divers. Wrestling someone at his level was a great experience and it was good to learn from him as well. I’d also say my favourite match so far was my in-ring debut because that was the moment I knew I really wanted to do this.

Wrestling at a comic-con, the atmosphere was great and it was a fun show.

TJ Rage, the student vs the coach.

Hopefully standing in a ring at the Airdrie Town Hall.

Simple. I love this, it’s my passion in life, to become a professional wrestler and make everyone who’s believed in me proud of my accomplishments.

Thank you to Stone for answering our questions.