On this edition, Eli Bulwark answers our questions. 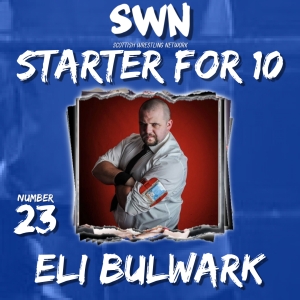 I never got to watch much of it when I was really young, we never had Sky at first. But I used to go round to my cousins and he would always have some form of wrestling on. There was something about the entertainment aspect that lured me in. I fell away for it for a number of years, until the same cousin introduced me to Wolfgang and in turn ICW, and I was a fan again.

Growing up I was definitely a Stone Cold guy. I was also a big fan of The APA and The Hardyz. Now, any one of the Shield members as they got me back into the modern era of WWE. special nod to Drew McIntyre too, he’s killing it out there.

My cousin was a pal of Wolfgang’s, I met Wolfgang when shooting a film and became pals (before I knew what ICW was). Years later when he opened up the GPWA I was determined to get there, but dragged my heels a bit. In the end, I took a cancellation of their first Wednesday intake and had about 3 days to prepare! That was 3 years ago now, and I’m still there.

I guess as both a fan and a wrestler, I’ve taken a lot of influence from The Big Boss Man, Abyss and Mark Henry. Then there’s UK guys like Pete Dunne, Mark Coffey, and The Filthy Generation. Of course there’s all my coaches. It’s not been an easy journey and their patience and knowledge has helped me in so many ways. With the addition of Stevie Xavier and Kay Lee Ray, we’re a bit spoiled for knowledge!

My favourite so far has to be Lionheart in Dennistoun. I’m an East-End boy, and any Dennistoun show we run is wild. They didn’t disappoint that night. I learned a lot in that match itself, and Lionheart was incredibly fun to work with!

The aforementioned match with Lionheart, plus the ICW title shot against Jackie Polo 2 days later. I was out of my depth, evidently, but I took the chance!

Wolfgang, hands down. He’s the one who got me invested, and I can only hope to get face to face with him one day! If we’re talking fantasy matches, then probably Jeff Hardy or Stone Cold! I would also love a Lionheart rematch, too!

I hope to be a mainstay in and around the UK. I’ve a couple of English shows in 2019, so that’s a start. ICW is the obvious goal but also places like PWE, BCW, TNT, SWA. There’s so many places and I want to show I’d be a valuable and dependable member of their roster! I’m sure I’ll have a bit of gold, too…

To entertain people. It’s a booming industry and so many folk are invested in it, so as a fan I want to be able to help keep it going!

Thank you to Eli for answering our questions.