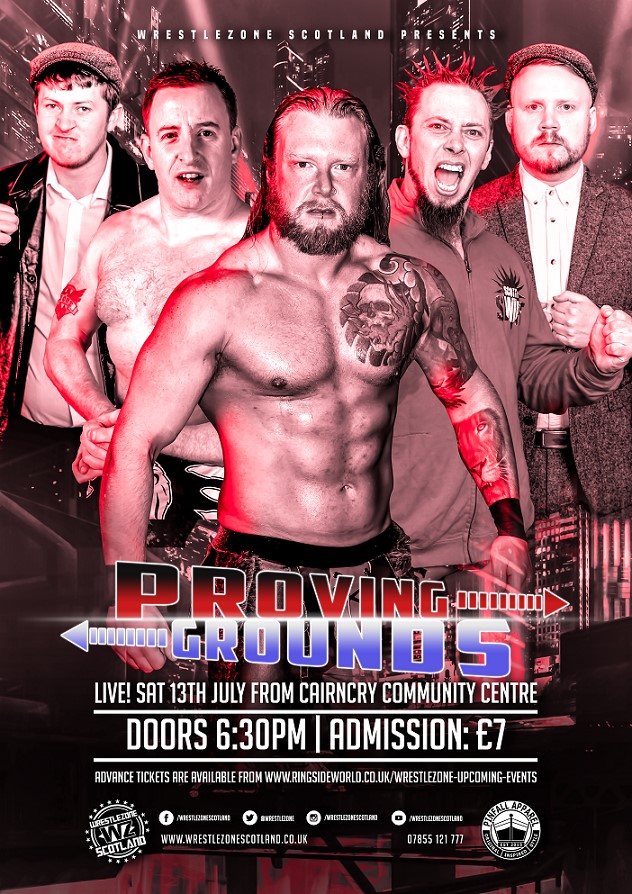 This past Saturday would mark one of WrestleZone’s annual events of the calendar year, that being Proving Grounds live from Aberdeen’s Cairncry Community Centre. The Proving Grounds shows are always one of my favourites of the year, with one or two new faces typically popping up. This year’s offering would see at least one WrestleZone Training Academy graduate in each match, including one graduate making his main show debut as well as the debut of a W3L Action Academy student!

Kicking things off was a singles bout as tag champ Johnny Lions went toe to toe with, and I quote, TEEEEEENNNNNNAAAAAACIOUS Ryan Riley. A slow start to the bout with Riley refusing to tie up with the much more experienced Lions, preferring to instead do some working out at ringside. He’s lost seven stone remember guys. When things properly began, it was quite the back and forth battle, lots of ground work from both men with headscissors and legdrops of doom. Big Bradley Evans at ringside (or as Michael Cole would call him, The Mad Daaaaawwwwwg) got involved momentarily behind the referee’s back (a new referee by the way, at least the first I’ve seen of him), but nothing was keeping Johnny down as he bounced back into it. We saw the Tenacious Gunn, we saw the Lion Bite, we even saw a bloody superplex that was so impactful, it caused part of the wooden boards from the ring to pop out of place (easily fixed by Blue Thunder post-match thankfully). A reversed small package from The Tenacious One saw the Tag Team Champion pick up a victory over the Foundation of the Future member.

Coming into this one, I wasn’t expecting that much. A good match obviously, but nothing overly special – just two great wrestlers doing their thing. After it was all said and done though, it was probably my favourite contest of the whole show. The constant back and forth action, Ryan Riley just being Ryan Riley, the minor involvement of Bradley Evans not taking anything away from the two actual participants. It was a perfect match in my eyes.

Speaking of things that were great, Umar Mohammed. The Asian Sensation made his WrestleZone debut here out of the W3L Action Academy down in Fife, but he faced quite the task in his first venture up north against the mighty Caleb Valhalla. As soon as he burst out to ringside, it was clear that Umar was just a bundle of joy. He was leaping all over the place and even gave referee Mikey Innes a shot of his sunglasses (sunglasses indoors, what a mad lad). Quite the contrast to the cold demeanour of Valhalla. Umar had a great performance here, punching Caleb’s abs to literally no avail whatsoever. From there, the bodyguard to Alan Sterling flung his opposition all over the ring with some gorgeous overhead belly to belly suplexes. There was a kid in the crowd who came out with quite possibly my favourite comment of the night – “it’s not fair, that guy has more muscles than the other guy”. Yes, yes he does. Mohammed had an impressive spot where he was on his knees and bent right back so he was lying flat before somehow elevating back up without the use of his arms. Incredible scenes. Sadly for him though, he would find himself planted into the mat with a swinging side slam by Caleb to end things on a sad note for Umar in his north east debut.

On social media, I’d been hearing Umar Mohammed referred to as W3L’s next best thing. Honestly though, I’d call him Scotland’s next best thing. When briefly speaking to Johnny Lions in the interval, I was told Umar had only just turned 18. You’d never have guessed that judging by his abilities. The guy is brilliant in every aspect – he’s got charisma for days, he knows how to get the crowd involved, he’s one of the most athletic guys I’ve seen, he’s got a flashy moveset (including an Old School-style DDT). Expect to see big things coming his way in the years that follow. As for Caleb Valhalla, what else is there for me to say that hasn’t already been said in previous articles? A future champion for sure – just give me that singles match between him and Kaden Garrick.

Highlights of the match available here.

It’s no secret that I despise Cysto with all my heart, but I’ll give it to him (or her, you never know who’s under that mask) – it’s a catchy theme tune. Aside from that though, The Tangerine Dream is everything wrong with the world. He (or she) found themselves on the other side of the ring from the debuting Mauler Murphy, the latest name to come out of the WrestleZone Training Academy. For his first match on a show, Murphy put in a decent showing. As his name suggests, he’s a big powerhouse who can easily destroy opponents, something that Cysto found out the hard way. Right off the bat, the former Tag Team Champion ran straight into the newcomer, only to fall flat on his back – a considerable size difference between the two competitors here. From there, it was a one-sided beatdown courtesy of Murphy. Body splashes in the corner, scoop slams, biel throws, all sorts. A jumping splash, shades of Mark Henry, would mark a successful start to the WrestleZone career of Mauler Murphy.

A decent performance from Murphy here, although I’m not particularly keen on those trousers he had on. But we’re not here to judge the wrestlers on their attire are we? No (unless it’s The Johnsons from the early days of Impact). As long as he just keeps up performances like this where he beats his opponents down to a pulp, then he could easily become a big name on the WZ roster. Then later on when he’s made a name for himself, put him in there with the likes of Crusher Craib. Big lads battle – what’s not to love about that?

Main event time now, and a match I was looking exceptionally forward to. The Outfit vs Scotty Swift and Connor Inglis. Dino and Ted entered to their normal music, while the fans decided to give them a rendition of Old MacDonald Had A Farm, something that nearly buckled Martyn Clunes judging by the look on his face. The #1 contenders to the Tag Team Championships ambushed Swift and Inglis during their entrance, leading security to fear for their lives incase the entrance video screen and tripod setup didn’t fall (spoiler alert – they didn’t) before the match finally made its way into the ring. Just want to give a shoutout to Dino Del Monte here. He was brawling with Scotty Swift right next to where I was sat, and his chops are one of the loudest things I’ve ever heard, up there with the sounds made by BT Gunn and WALTER if you ask me. Inside the ring, The Outfit dominated proceedings, keeping The Red Haired Warrior in their corner at all times. The roof nearly came off the venue when he finally made the tag to Connor, with the youngster coming in all guns blazing. Enzuigiris were flung all over the place, before it looked as if he and Swift were on the cusp of victory when they attempted to hit, and I’m not joking here, a moonsault spike tombstone piledriver (looked like that’s what it would’ve been at least). That’s when Crusher Craib stormed out, catching Connor out of midair with a brutal forearm to the jaw while Scotty was downed with a Magic Killer from Del Monte and O’Keefe for the three count. The Outfit continued their attack after the match, including beating down Johnny Lions who had come to his partner’s aid.

A highly enjoyable main event here. The story with Dino and Ted isolating Swift from his corner of the ring made it even better when Connor was finally tagged in. That lad will 100% be a huge star in the next few years – if he’s not scared to stand up to Crusher Craib, then who knows what will make him back down. Aside from him, the Battle of the Nations tag titles match now feels a whole lot more personal following this attack from the challengers. I believe they’ve been doing the same sort of thing on other shows, but seeing it in-person makes you realise just how much they want their hands on those Tag Team Championships.

Overall, a highly enjoyable night out. Hoping we get to see more of Umar Mohammed up this way, a genuine star. Battle of the Nations is the next stop on WrestleZone’s 2019 journey, taking place on August 17th from Aberdeen’s Northern Hotel. As revealed by Martyn Clunes during this show, that event will mark 10 years of WrestleZone hosting shows at the venue, and so there will be 7 matches on the card alongside a VIP ticket holder match (much like how things usually work at Aberdeen Anarchy). Keep your eyes peeled on their social media pages in the next few weeks to see everything that’s going to be announced for that event, as well as a look back at some of their favourite moments from their time at the Northern Hotel!