Preview: WrestleZone ‘Battle Of The Nations 2019’ 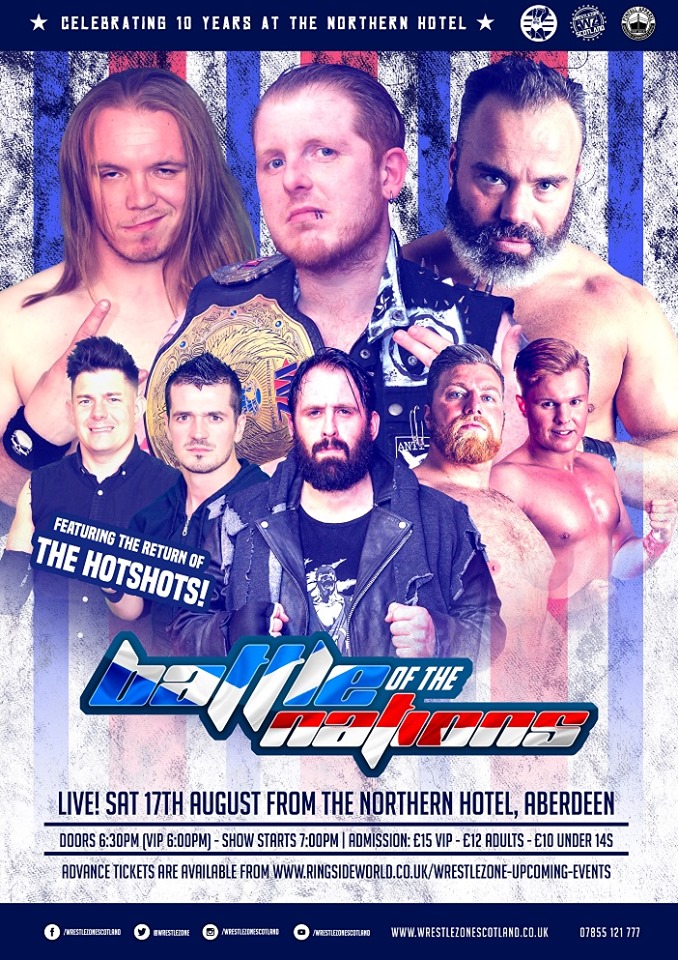 I don’t care if WWE touts SummerSlam as the biggest party of the summer, the real biggest party of the summer for north-east grappling fans is WrestleZone’s Battle of the Nations. Having been going since 2011, BOTN is always a highlight on the WrestleZone calendar. The past two events have been two of my favourite WrestleZone shows ever, as I’m sure many of you who were also in attendance will be able to agree. What’s special about this year’s instalment though is that it will mark 10 years of WrestleZone producing shows at the Aberdeen Northern Hotel. I could go on for hours speaking about some of my favourite Northern Hotel memories, but I’ve instead done that in list form so be sure to check that out too. Now, on with preview! 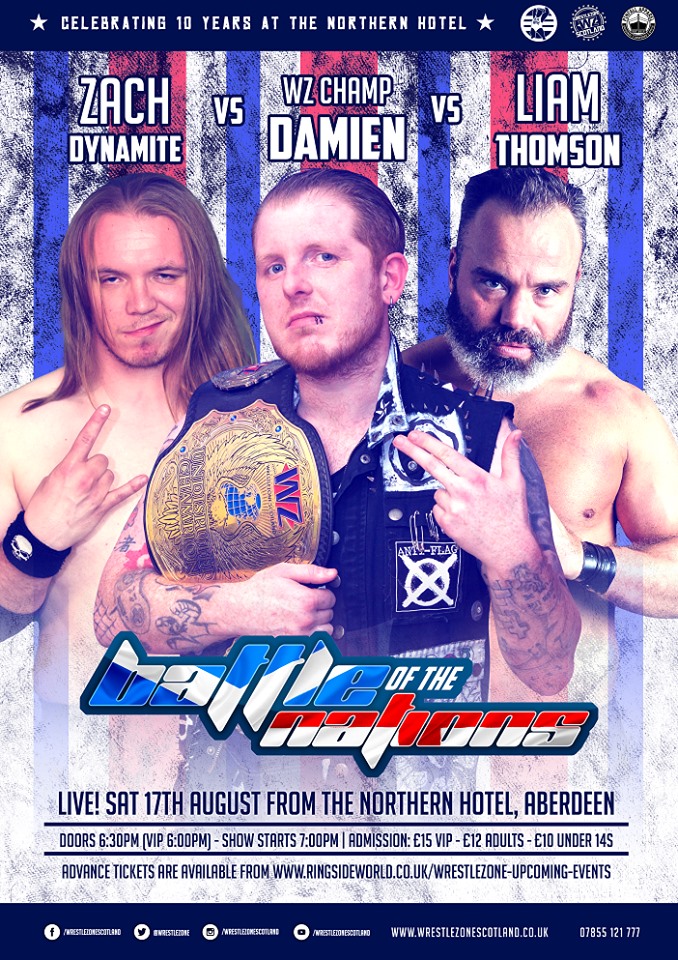 As is often the case whenever Damien is the Undisputed Champion, the numbers aren’t in his favour for this one as he not only has to contend with Zach Dynamite as a challenger, but also a returning Liam Thomson. Ever since he finally turned his back on Sterling Oil two years ago, the numbers have always been stacked against The Revolutionary. Whether it was his old Sterling Oil comrades ganging up to ensure he never won the Undisputed Championship again or special guest referee Austin Osiris making it near impossible for him to regain the title, it’s never been smooth sailing for Damien. In terms of this match, he has both challengers to deal with, but you also have to factor in the possibility of Bradley Evans and Ryan Riley intervening to assist Dynamite. The Foundation of the Future will stop at nothing to have championship gold around their waists. After all, Zach Dynamite is the, and I quote, ‘uncrowned Undisputed WrestleZone Champion’. 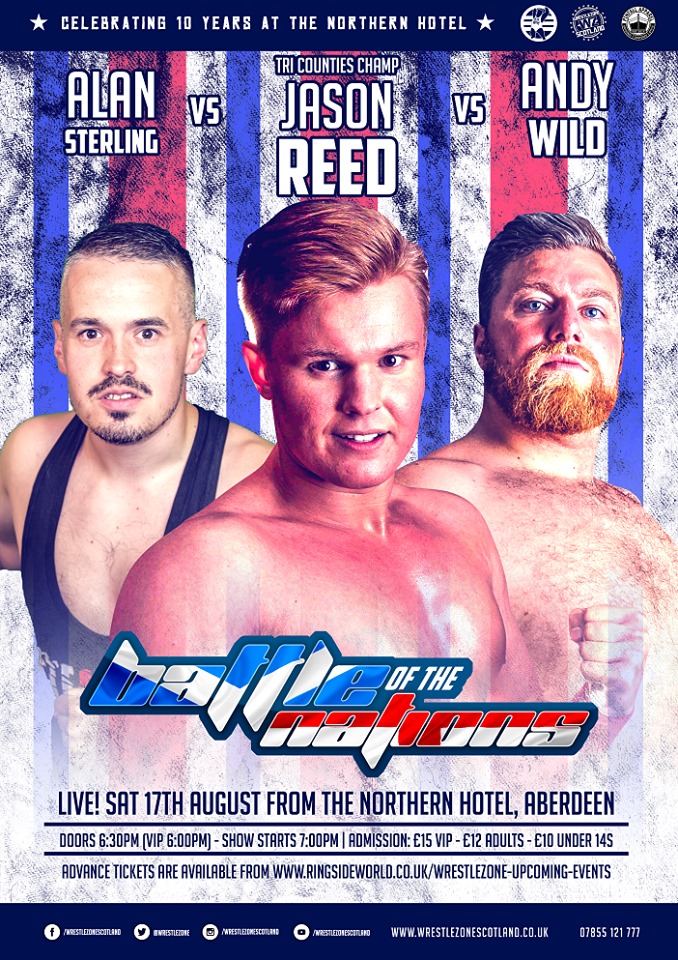 Jason Reed’s campaign to make wrestling great again faces a daunting obstacle at the Northern Hotel, as he must defend his beloved Tri-Counties Championship against both Andy Wild and Alan Sterling, making his first appearance since the start of May. Reed, who started the WrestleZone portion of his campaign at last year’s Battle of the Nations, lifted his first taste of WZ gold at Aberdeen Anarchy as he won the Tri-Counties Championship from Mr P in a match also involving Andy Wild and Shawn Johnson. Ever since, he’s defended that title against all comers, including a successful defence down at Discovery Wrestling against Alexander Dean, Fraser Thomas, and The Sam Barbour Experience. He’s doing everything he can to elevate the prestige of that title but now, he has to back up everything he says by taking it to both Andy and Alan. Speaking of Alan, he’s made a risky mistake in this match, as he’s given bodyguard Caleb Valhalla the night off. It’s safe to say Alan’s not been all there since the dissolution of Sterling Oil, but he can surely see he needs Caleb by his side for this match. Ah well, I guess it won’t be all about Alan on Saturday night then…

This was the first match confirmed for the show back at Aberdeen Anarchy, as The Outfit became the #1 contenders to the WrestleZone Tag Team Championships, the same night Scotty Swift and Johnny Lions won the titles from The Kings of Catch in a phenomenal Triple Threat Steel Cage Match. After securing their position as the challengers for the tag titles, Dino Del Monte and Ted O’Keefe have made it their mission to ensure Swift and Lions remained the champs until Saturday’s show, even if it meant interfering in title matches to send the champs a message. Now, not only are the Tag Team Championships up for grabs, but so is Johnny’s WrestleZone career. The Tenacious One has stated that his final match inside a WZ ring will be when he and Scotty lose those tag titles. Judging by the roll Dino and Ted have been on since making their debut just 17 months ago, that could very well happen here. All it takes is one of those gnarly rolling elbow strikes from Dino, and we’ll crown new Tag Team Champions by order of The Outfit.

A rivalry that has been brewing throughout 2019 will finally come to a head as Crusher Craib meets Connor Inglis one on one. The WrestleZone Training Academy member, who at the time was on security duties, was handpicked by The Creator of Carnage to face him at Summerhill Showdown. Although it was mostly a one-sided beatdown, Connor showed plenty of fire in him here, and actually very nearly scored the pinfall. Since that fateful January night, the pair have come to blows at every opportunity they’ve had. Connor has gone on to become one of the biggest fan favourites, thanks in part to him eliminating Crusher from this year’s Regal Rumble Match mere seconds after Craib had entered the ring. Inglis has slowly become the biggest thorn in Crusher’s side, costing him his unpinned streak at Aberdeen Anarchy, and also costing him the chance to win the WrestleZone Tri-Counties Championship. Things aren’t sitting well with the former three-time Undisputed Champion, which resulted in him issuing this challenge for Saturday’s show. If I’ve learned anything from following WrestleZone the past six years, it’s that you never want to get on the bad side of Crusher Craib. Unfortunately for young Connor, he’s gone far past that barrier.

When William Sterling ambushed Shawn Johnson at the WrestleZone Training Academy and told him to find a partner to face he and Blue Thunder at Battle of the Nations, he likely would never have imagined that Shawn would choose his old Granite City Hotshots partner Bryan Tucker. Shawn turned on Bryan back in November 2015 to join Sterling Oil, which William was of course a member of. This resulted in a fantastic rivalry between the pair throughout 2016 but after that, they went on entirely different career paths. Shawn would reach the top of WrestleZone, winning both the 2017 Regal Rumble Match and the Undisputed Championship on two separate occasions, while Bryan would be a top contender in the Tri-Counties division before being on the team of WrestleZone stars who resulted in the end of Sterling Oil at Aberdeen Anarchy X. That’s a night William Sterling still hasn’t forgotten about. He attempted to get revenge on Scotty Swift and Johnny Lions (two other members of the team), which even saw him realign with Blue Thunder, although The Masked Wonder still doesn’t seem overly keen on the Sterling brother’s tactics for winning matches. Now, he wants to make a statement at the expense of the reunited paring. I guess you could say this one was written in the stars, a million miles away. Can you tell I’m excited to see The Hotshots back together?

Perhaps the most surprising match on any WrestleZone card in some time comes in the form of Mikey Innes vs Austin Osiris. Innes will be making his in-ring debut at Battle of the Nations because, well, he’s typically seen donning the black and white stripes as a WrestleZone official. Following the events of Aberdeen Anarchy back in April however, Mikey is exceptionally keen to get his hands on one man, and one man only. RUDO Lightning, who was then the Undisputed Champion, brought in a special guest referee for his defence against Damien in the main event that night, opting to choose one of his GPWA students in Austin Osiris. As expected, Big Money swung the match in RUDO’s favour at any given opportunity by doing whatever he could to make it increasingly difficult for The Revolutionary to regain the gold. Mikey Innes wasn’t going to sit back and let that happen though, and after a bit of back and forth between them, Innes speared Osiris out of his boots and chased him back through the curtain. It was one of the most sensational moments I’ve ever seen live. Osiris, who is also making his WrestleZone in-ring debut on Saturday, laid down the challenge a few weeks ago, and it didn’t take too much for Mikey to accept. With three weeks of training courtesy of Damien under his belt, let’s see what Mikey has to offer when he trades in his referee shirt for a pair of wrestling boots.

While The Outfit will be challenging Scotty Swift and Johnny Lions for the Tag Team Championships here, the next challengers to the doubles gold will be decided as former multi-time tag champs The Rejected are set to tangle with Foundation of the Future members Bradley Evans and Ryan Riley. Both of these teams were involved in that Triple Threat Match at Aberdeen Anarchy where The Outfit earned their championship opportunity – from the interactions they had during that bout, I was hoping we’d get to see this match sooner rather than later. Chris Archer and Mikkey Vago are genuinely one of the most underrated teams in the country. They can literally have a great match with any team you put in their way. Kaden Garrick and Mr P, The Sterling Brothers, The Outfit, The Thunder Buddies, the list goes on. It’s a shame they don’t get used anywhere else, it really is. As for Bradley Evans and Ryan Riley, while they may not as established as their opponents, they’ve certainly left their mark on the roster in their short time together with Zach Dynamite. Tag team wrestling is great when given the chance, and this match will prove that fact. As Paul Heyman would say, that’s not a prediction, it’s a spoiler. 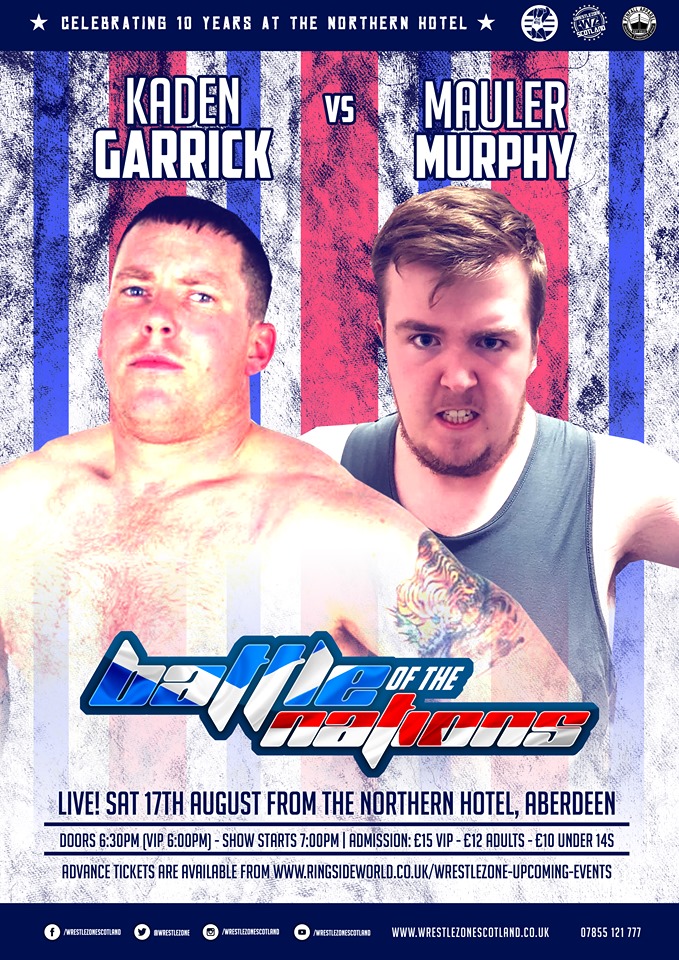 After an impressive debut at Proving Grounds, Mauler Murphy is back in action as he takes on the fierce Kaden Garrick. Murphy absolutely decimated Cysto in his first match last month (so he immediately gained a fan in me), but he won’t have the same easy task here against the former two-time WrestleZone Tag Team Champion. Even though Garrick still hasn’t picked up a victory since May 2018, he shows enough fight in him each time that it makes you believe that it’s finally his night. It never is though, and don’t expect the Battle of the Nations pre-show to be his night either. Not only does he have to try and tame the beast that is Mauler Murphy, but he may also have to fend off the members of The Foundation of the Future. Following a loss to Bradley Evans in Ellon three months ago, Kaden vowed to take care of the trio. He may have bitten off a bit more than he can chew there, no matter how many spears he dishes out.

Tickets are available from http://www.ringsideworld.co.uk, priced at £15 for VIP, £12 for adults, and £10 for under 14s. Fans can also pay at the door on the night. Doors open at 6pm for VIP ticket holders and 6:30 for general admission tickets holders, with the action officially getting underway at 7pm!