I know it’s a long time between articles but I hope that when we do bring you one it’s a nice surprise. And this time it’s not just one we’re bringing you. How about a double feature? I know. We’re treating you this time aren’t we. Kay Lee Ray is the focus of these two artists pieces and both do a great job in capturing her. So let’s begin.

First of all we have an amazing photo/edit from Martz Graphics. Here is his story behind the art:

‘I’ve liked Kay Lee Ray since her time in the independent wrestling circuit. First time I saw her was in ICW – it was a three way match for the woman’s championship with Nikki Storm (now Nikki Cross) and Viper. She impressed me then but I’ve been really impressed by her progression and integration into the NXT UK brand also and she’s proving to be a rising star in the business I think.

Wrestling artwork is my full-time work and my biggest passion. I work with Women of Wrestling – WOW and a few independent promotions, but, in my free time I like to support independent talent and my favourite people in pro wrestling.

I love the free creativity behind it and the infinite possibilities to create anything that comes to mind.’

And for the second piece we have a very professionally customed Funko Pop figure made by OMR Enigma.

When and how did you start making custom Funko pops?

‘I started in September 2018. My mum passed away in April that year. I’m an only child and lived alone with her until I was 25 (27 when she died). I struggled with mental health after losing her and found myself painting and created a distraction that helped me deal with my emotions. I have a passion for collecting Funko and decided to make myself a Valentino Rossi custom Funko. I posted it on social media and it was well received so I continued.’

Tell us a little about the Pro Wrestling Eve and wrestling pops that you made. How did they come about? What was the inspiration behind Kay Lee Ray and the wrestling pops in particular?

‘A Pro Wrestling:EVE fan, Garry, approached me to see if I could make one for him (that’s also how the Kay Lee Ray one came about from a different individual commission). Together we designed a unique box and sticker. Just for EVE. After this and posting on social media, I had multiple orders for Pro Wrestling:EVE pops and other wrestling brands also. I am now a fan of wrestling myself particularly Pro Wrestling:EVE! My favourite EVE wrestlers are Nina Samuels, Laura Di Matteo and Charlie Morgan, who’s sadly now retired. I also like collecting the signed pictures. Would love to add more to my collection… I welcome the challenge of creating more wrestling Funkos and hopefully I get to complete more soon.’ 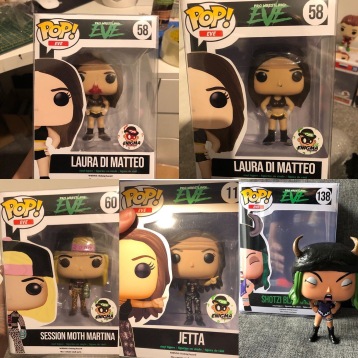 I want to thank both Martz Graphics and OMR Enigma for talking to me and if you want to check out more of their work, which I highly recommend you do, you can find them here:

If you have a Scottish Wrestling inspired fan art piece and would like to be featured, get in contact is with us

Thanks again see you next time.