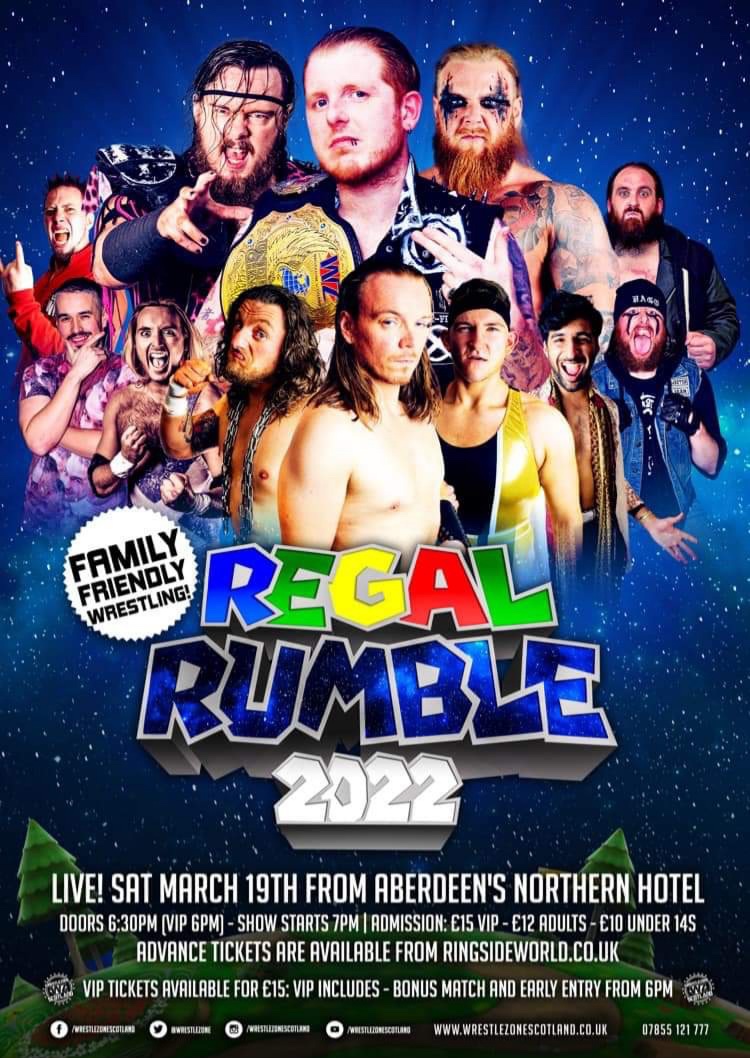 Alexa, play ‘It’s The Most Wonderful Time Of The Year’ by Andy Williams.

It’s WrestleZone Regal Rumble season once more, the eleventh instalment of the beloved event. Everyone loves a Rumble. It’s part of the initiation process when you first become a wrestling fan to watch every single Royal Rumble match in history (yes, even 1995’s classic with Eli Blu, Well Dunn, and other New Generation Era pillars).

In WrestleZone, the Regal Rumble begins the road to Aberdeen Anarchy, which this year will be held from Aberdeen’s Northern Hotel on Saturday, 14 May. The winner of the titular match bags themselves a shot at the Undisputed Championship, which is currently held by Damien, but to get there, they’ve got to fend off 24 other potential contenders all vying for the same thing.

The current list of announced Regal Rumble entrants is as follows:

Previous winners include Crusher Craib, Scotty Swift, Shawn Johnson, and Richard R. Russell, so y’know, don’t rule out the possibility of the ghost of Lord Mr Malice emerging from the sound desk to go one step further than he did in the 2014 Regal Rumble or, dare I say it, Cysto goes the distance. I’ll be internally screaming from Inverurie the whole time he’s in there. 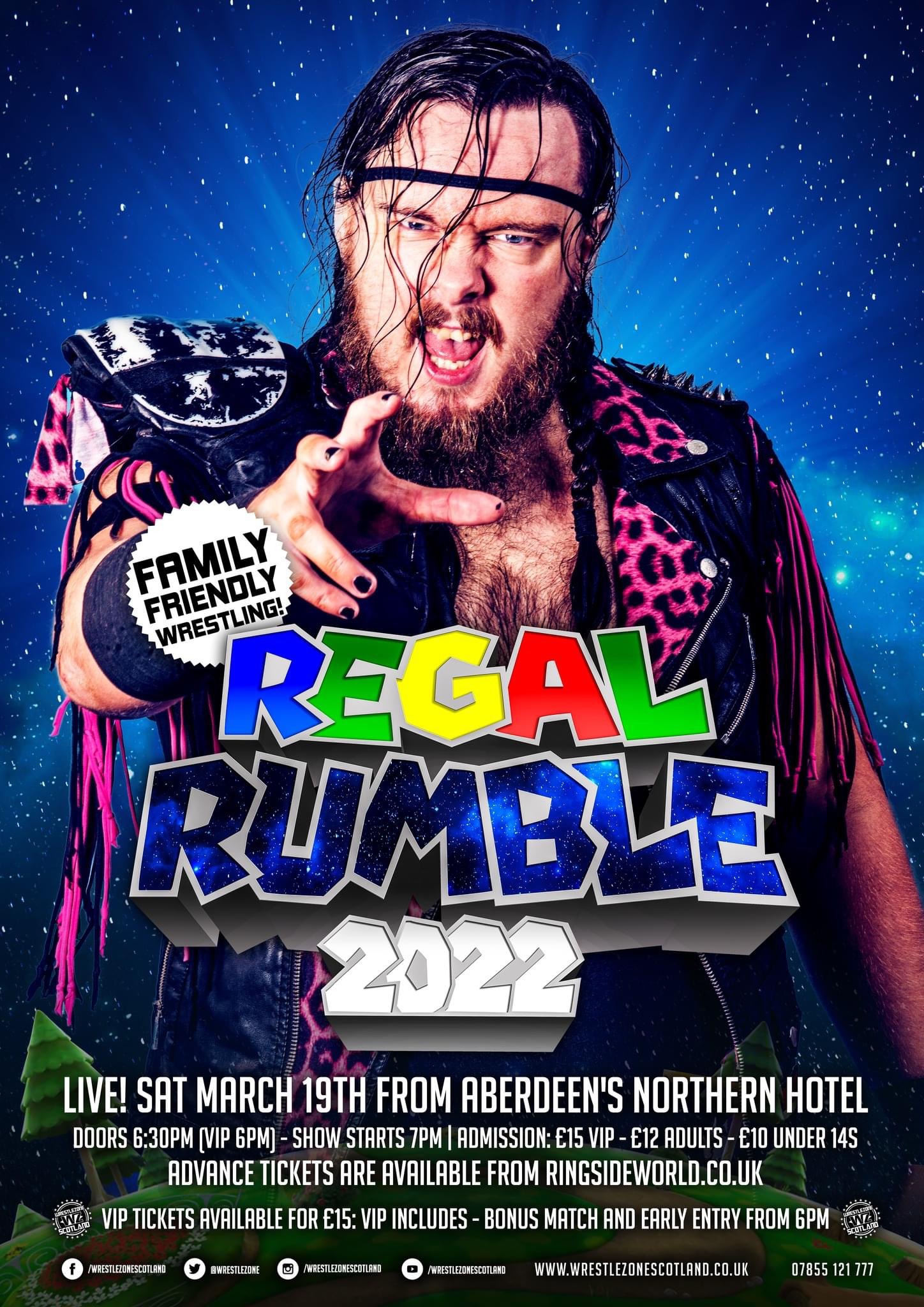 Let’s get the obvious out the way immediately, yeah?

2022 is not the Year Of The Tiger, but rather the Year Of Aspen Faith Finally Winning A Rumble. He has to, surely. I’m fairly certain Billy and Kyle and other Aspen Faith ‘stans’ (I’ll be raging from a distance at my sheer use of the word) will storm the ring, blaming Dennis Law if, for whatever reason, Aspen Faith is eliminated from the ring, Martyn Clunes standing from afar chuckling.

Or, he wins it, goes on to Aberdeen Anarchy to face Damien, and all is right with the world.

When he returned at Summerhill Showdown, he was welcomed back with a rapturous ovation. Aspen Faith is a WrestleZone guy, for all the ventures he’s been on since last appearing in April 2019, The Lost Boy is WrestleZone born and bred. A former (and inaugural, two-time, and some would say greatest) Tri-Counties Champion, a former Tag Team Champion with James Midas, multiple memorable moments and matches, undefeated in World of Sport matches, the list goes on.

Regal Rumble winner is not one of them, though. Either is being Undisputed Champion. Now’s the time. Aspen Faith vs. Damien is a main event anywhere in the country for my money. Their styles gel together ever so nicely, the match has literal money written all over it. 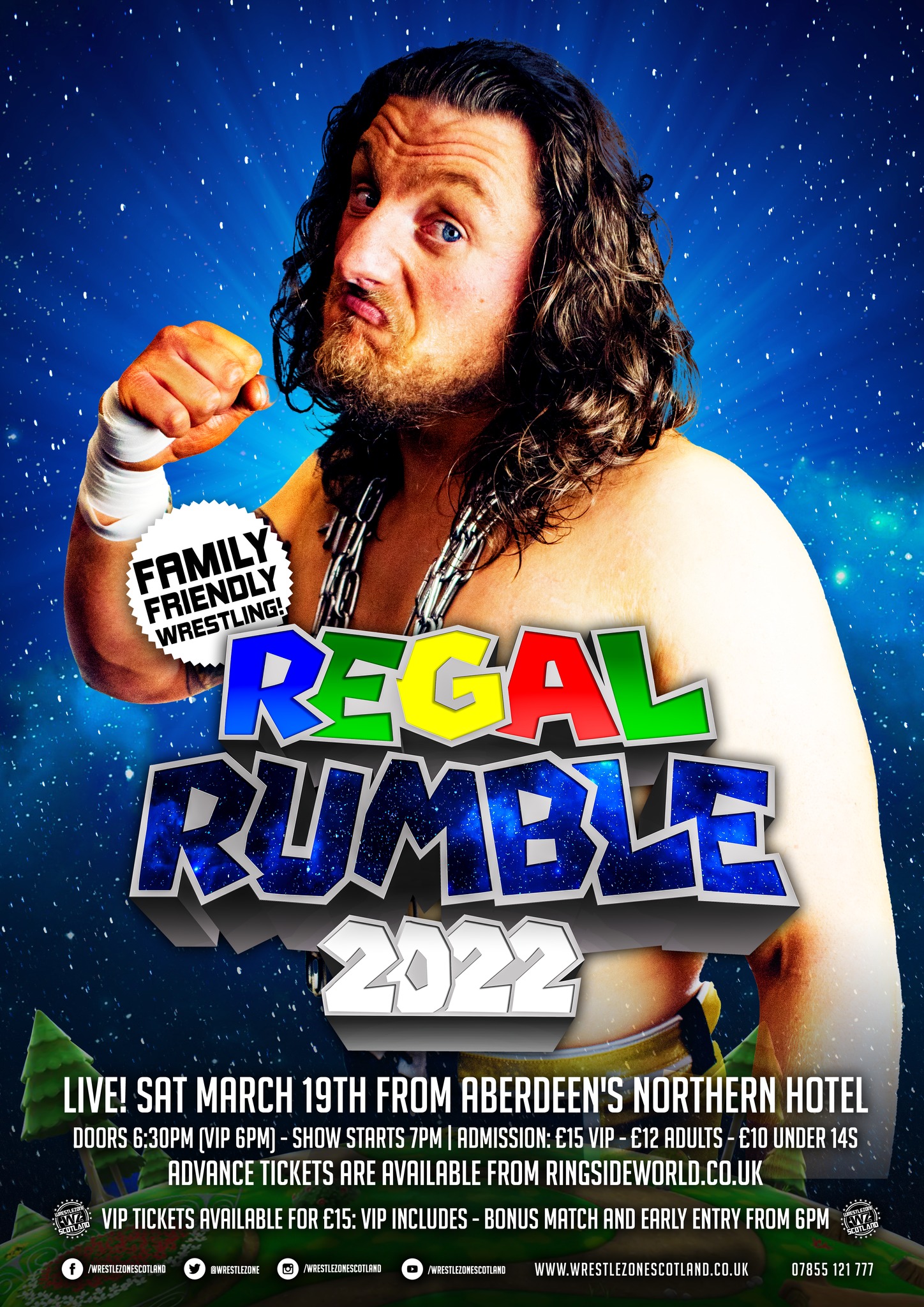 Another fairly obvious choice, based purely on his entry number. Bruiser Brad Evans will enter the Regal Rumble match last, just as he did in the Reckless Rumble last month. There, he dumped Aspen Faith out of the ring with Ryan Riley. The next day at Discovery Wrestling’s second All About The Raffle, the former Mad Dog defeated Aspen in what sounded like a barbaric affair. A brutal Piledriver seemed to be the highlight there.

This isn’t the same Bradley Evans who entered his first Regal Rumble feeling damn good about it. Evans has gone through a serious trajectory change, going from the fun-loving, high-fiving Bradley Evans to the uncontrollable, Bruiser Brody-inspired, steel chain weilding Bruiser Brad Evans. How could you not put money on Evans as a Regal Rumble favourite?

He’s got the numbers advantage, too; Zach Dynamite and Ryan Riley are entering the match as well. As proven, a numbers advantage is key to winning the Regal Rumble, considering Sterling Oil members won the whole thing in 2017 and 2018. The Foundation of the Future is building some steam, they’ve been up and down the country as of late with more and more companies eyeing them up as potential roster members.

The foundations are there, pun very much intended, for a Foundation of the Future success story in 2022. A Regal Rumble win will start that off perfectly. 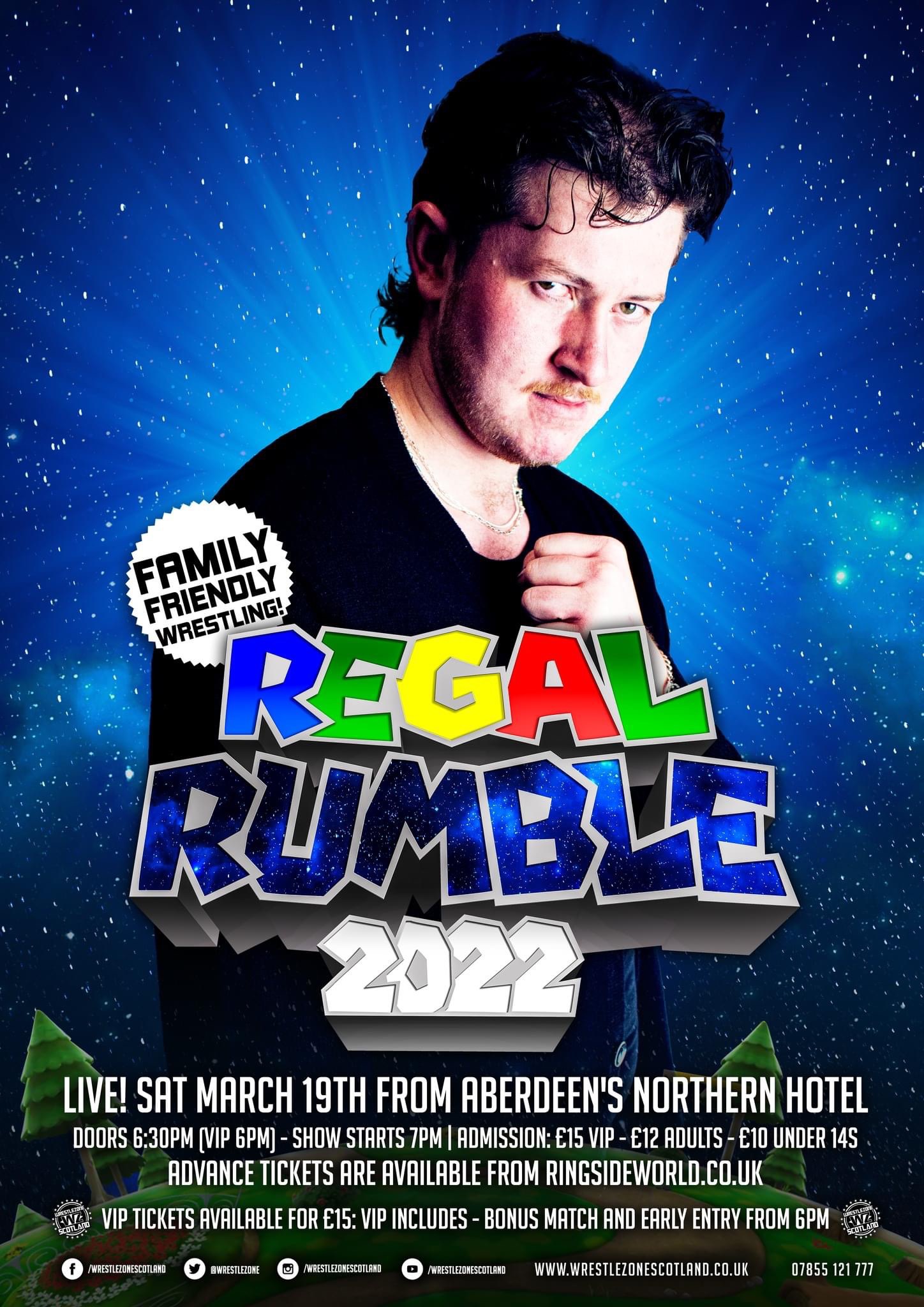 Dino (sans Del Monte) would have been a wildcard choice, had he not delivered a breakthrough performance vs. Damien in Ellon. That whole show eliminated the whole “smaller town shows aren’t as important” mantra from my mind, but Dino and Damien managed to shine tremendously, which was impressive in itself considering Crusher Craib vs. Caleb Valhalla was the same night.

He’s now got Murphy watching his back, a fellow bruising powerhouse who was previously in desperate need of something to get himself going. Dino is that something, he’s the complete package if you ask me. A credible in-ring talent, solid on the mic, he’s got the look, and most importantly, he’s shaken off that Rumble ring rust by entering the Reckless Rumble.

The thing with Dino that could propel him to the Aberdeen Anarchy main event is you never know where to begin with him. He claims to be the best striker in WrestleZone, which is a fair statement when you consider his roaring elbow that would make our lord and saviour Chris Hero proud, but then he’s got the Piledriver, the Stonehaven Legdrop, the (seemingly) Chris Hero-inspired Death Blow. A true jack of all trades.

Dino has already proven he can hang with Damien in non-title competiton. Now, he just has to make his way through twenty-four other aspiring contenders to reach that lucrative 14 May championship contest. 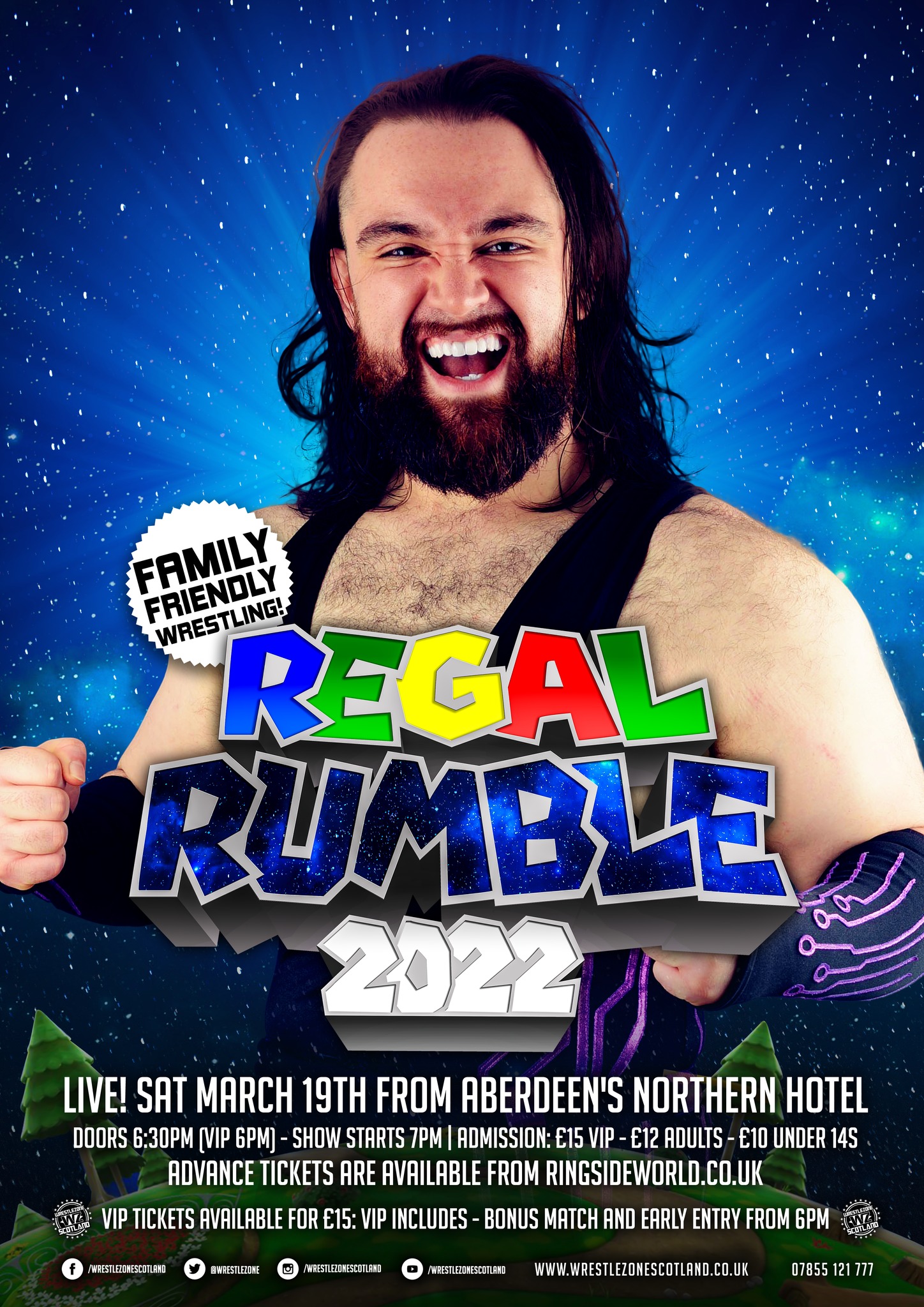 This is a real wildcard choice.

When Nathan North was first confirmed for his WrestleZone return, you could tell just by his promo pic (or, y’know, if you’ve followed his career like us ScotWresNerds have) that something in him was different from the last time we saw him. For those asking, by the way, that would have been Aberdeen Anarchy X in September 2018, which turns four-years-old this year and…just no. Leave the memories alone, I’m not aging, the world isn’t a revolving circle!

North is now a gamer boi, he’s gotten rid of the dark, almost gothic-like look he was going for previously which, personally, I loved. It set him apart from the WrestleZone roster of colourful characters and big personalities, he’d ditched Jeeves Winchester, and he was really getting in about the scene. When he left, although it was a shame, it allowed him to expand his horizons.

Now a regular fixture it seems in Fair City Wrestling and Reckless Intent, the former Tri-Counties Championship contender is a dark horse to win this whole thing.

Look, if Mr Malice can eliminate Jay Lethal and then by the final man eliminated, I think anyone stands a chance. 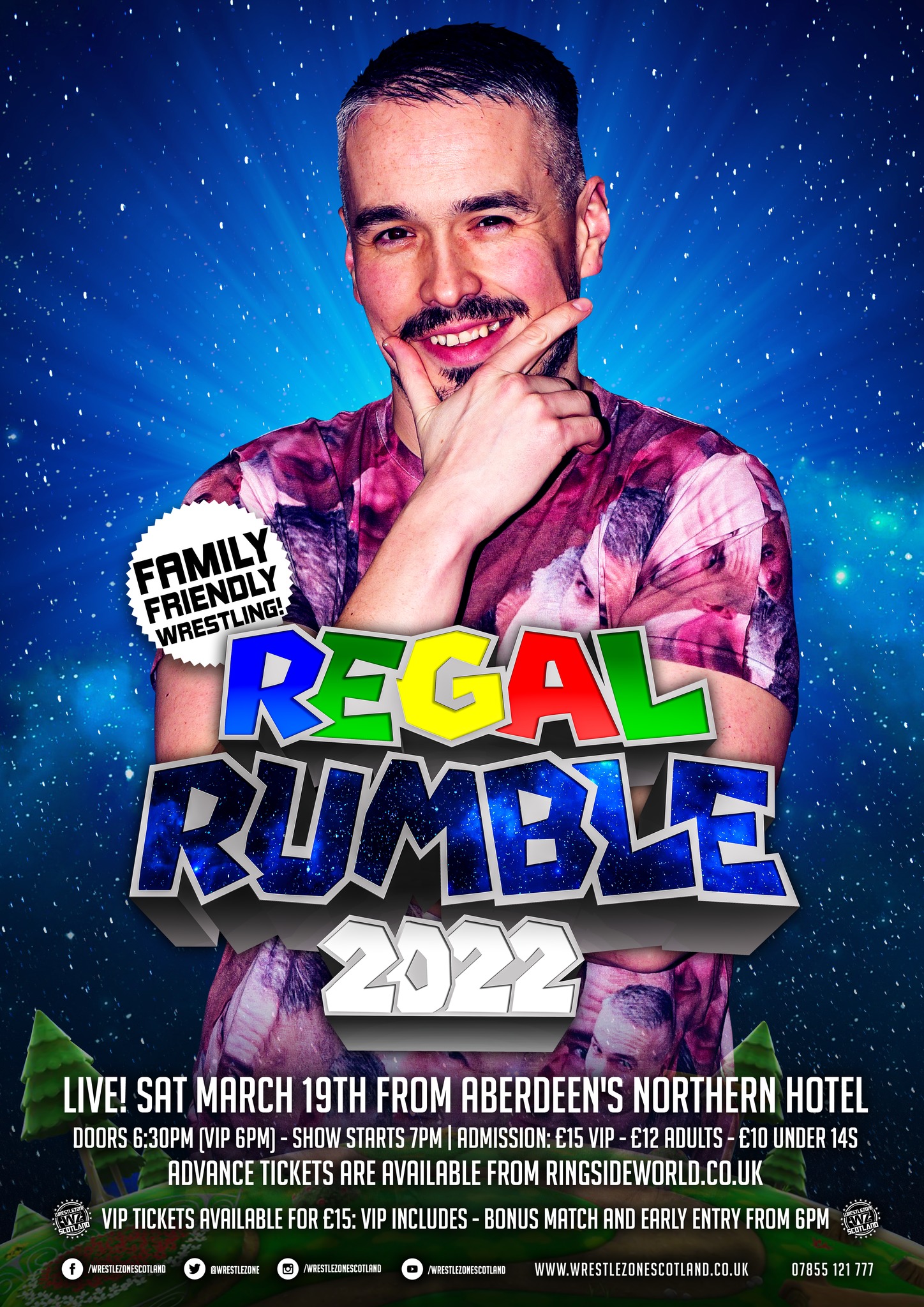 Anyone does stand a chance, which is why Captain Alan Sterling could win it all, too.

Owing to his loss in the infamously can’t-be-put-online match against Mikkey Vago in March 2020, Captain Alan Sterling, sailor’s hat and all, will enter this year’s Regal Rumble from the number one position. Number one, as we know, is the worst number to draw in a Rumble match and is totally different from drawing number two. For Alan, this means he can’t surely win.

Stranger things have happened. The Regal Rumble will have bodies being chucked about all over the place, allowing the likes of Alan to hide in corners and behind bigger, beefier brutes, such as Caleb Valhalla. Alan and Caleb will also challenge Connor Molloy and former three-time Rumble winner Crusher Craib for the Tag Team Championships on Saturday, so theoretically, Sterling could leave Aberdeen Anarchy as WrestleZone’s first Triple Crown Champion while holding all three titles.

Can you imagine the sheer nuisance he’d be if he did such a thing? We’d never hear the end of it, which is precisely why he should win it. Captain Alan draped in gold; this stuff can’t be written.

Who’s your pick to win the 2022 Regal Rumble match?

Tickets to the event are available from Ringside World, priced at £15 for adults and £12 for under 14s. Doors open at 6pm for VIP ticket holders and 6:30 for general admission, with a scheduled start time of 7pm. The rest of the card is as follows: