With all the fallout from Aberdeen Anarchy just two weeks ago, the stars of WrestleZone return to the Victoria Hall in Ellon for an action-packed night of pro wrestling action. Six huge matches have been announced for the show, including all three of WrestleZone’s titles up for grabs.

The main event for this Saturday will see Shawn Johnson put his Undisputed Title up for grabs against Mr P, who receives his first singles title opportunity in Ellon. After cheating his way to claim the Undisputed Title at Aberdeen Anarchy, the former Granite City Hotshot finally cemented his place on top of WrestleZone. Also at the Beach Ballroom supershow, Mr P put an end to his rivalry with Andy Wild as he teamed with Grado and WWE Hall of Famer Rikishi to defeat the team of Wild, Kid Fite and Sha Samuels. Now, Mr P finds himself in front of a huge opportunity to hopefully become Undisputed Champion and end Shawn’s reign after just two weeks. Can Mr P fulfil the journey from WrestleZone management representative to Undisputed Champion?

Doesn’t that champion sign look nice next to Aspen’s name? After becoming the inaugural Tri-Counties Champion in a Fatal Four Way Ladder Match at Aberdeen Anarchy, Aspen Faith will put his newly won gold on the line against recent WrestleZone Training Academy graduate Bradley Evans. After picking up the win for himself and Blue Thunder on the pre-show of Aberdeen Anarchy, Bradley impressed WrestleZone management enough to earn a shot at Aspen’s gold. Meanwhile, The King of Catch competed in a match of the year worthy Ladder Match to pick up that title. Can Evans pull off the upset this early in to his career?

After retaining their Tag Team Titles and shaving Richard R. Russell bald at Aberdeen Anarchy, The Rejected find a new pair of challengers in their way this Saturday in the form of former Undisputed Champion Andy Wild and the most vintage man in all of wrestling Nathan North. The Rejected have defeated some tough teams during their time together, such as The Sterling Brothers and Kaden Garrick & Mr P, but they’ve never faced someone quite like Andy Wild. With the most vintage man on the roster by his side, Andy Wild could quite possibly become a Tag Team Champion this weekend. Nathan and Bradley Evans only made their official debuts this past February and are both challenging for championship gold after just under 5 months after. They’ve got bright futures ahead of them. 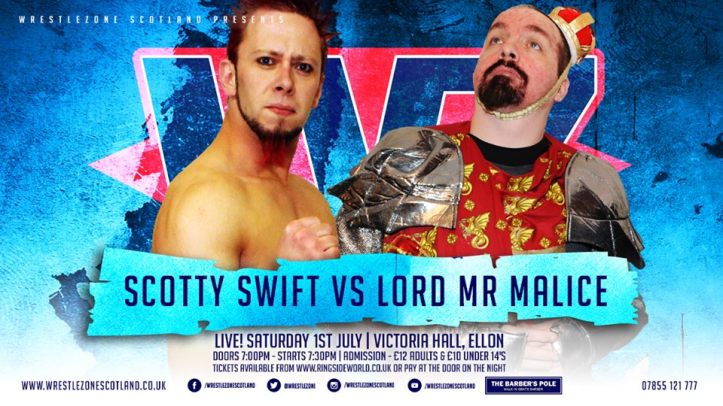 Scotty Swift will be in action this Saturday for the first time since losing the Undisputed Championship at Aberdeen Anarchy as he takes on Lord Mr Malice. Since being betrayed by Sterling Oil’s newest member Crusher Craib at the Beach Ballroom supershow, all requests for comments from Swift have been declined. Lord Mr Malice was also unsuccessful at Aberdeen Anarchy, teaming with Nathan North in a losing effort to Blue Thunder and Bradley Evans on the pre-show. Both men will be looking to get momentum back on their side, with WrestleZone’s next big event Battle of the Nations on September 2nd quickly approaching.

After defeating Damien at Aberdeen Anarchy to finally put an end to their rivalry, Johnny Lions now tries to get back into title contention. His journey begins this Saturday and it won’t be an easy start as he’s facing the Super Executioner, who’s furious at not being featured on Aberdeen Anarchy for the fifth year in a row. Executioner currently holds a victory over Scotty Swift while he was the Undisputed Champion, so we all know he is more than deserving of a title shot. Chris McDonald and the rest of WrestleZone management should think about making this a #1 Contenders Match. 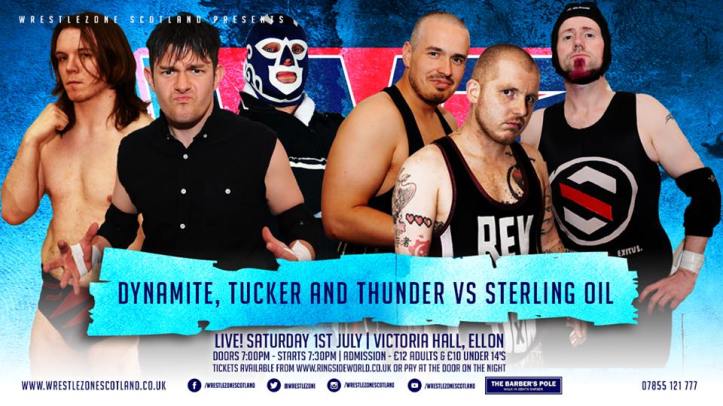 Six man tag team action takes place in Ellon as the team of Blue Thunder, Bryan Tucker and Zach Dynamite team up to face the Sterling Oil trio of Damien and The Sterling Brothers. After both being unsuccessful in their bid to become the first Tri-Counties Champion at Aberdeen Anarchy, Bryan Tucker and Zach Dynamite will be looking to stake claim as the #1 contender to Aspen Faith’s title. Blue Thunder however was successful at the Beach Ballroom, as he teamed with Bradley Evans to defeat Lord Mr Malice and Nathan North on the pre-show. Sterling Oil lost two of their three bouts at Aberdeen Anarchy, as Damien lost to longtime rival Johnny Lions and The Sterling Brothers were unable to win back the Tag Team Championships from The Rejected, resulting in their manager Richard R. Russell being shaved bald. These three will need to step up their game in Ellon, or there could be some serious repercussions from Russell.

Tickets for the show are available from www.ringsideworld.co.uk, priced £12 for adults and £10 for under 14s. Fans will also be able to pay at the door on the night. Doors at the Victoria Hall open at 7pm, with the action set to get underway at 7:30pm.