It’s a big weekend for wrestling fans, with All In being the main of wrestling talk since it was announced. Scotland has its fair share of tremendous shows up and down the country too though. Source, BCW, and Reckless Intent are all holding shows while WrestleZone are presenting Aberdeen Anarchy X (which you could probably tell judging by the fact that the SWN website has been dominated by WZ articles recently). Just now, we’ll be taking a look at Discovery Wrestling’s event at the Jam House on Sunday, featuring a host of fine competitors!

The next challenger for Joe Coffey’s Y Division Championship will see Christopher Saynt step up to the plate. The Patriarch of The House of Saynt feels that his fellow HoS stablemate Theo Doros should never have been entered in to the Hotter Than Hell Edinburgh Invitational Tournament and when Doros was eliminated in the first round, Saynt was less than impressed to say the least. Just as he was running down Theo and saying that he would be able to capture the title, Joe Coffey walked by with a grin across his face. It’s been just under a year since The Iron King ended Lewis Girvan’s 666-day reign on top of the Y Division, seeing off all comers. Christopher Saynt may have bitten off more than he can chew and with tensions running throughout The House of Saynt, I won’t be expecting them to help him out.

Since writing this, it was revealed that the winner will defend against Discovery debutant Timothy Thatcher on November 4th.

The Women’s Championship will be defended as Sammii Jayne has now returned from injury to face both Viper and Nina Samuels. The Main Event Empress has been left on the sidelines since the end of May after suffering a broken ankle in an ICW match with Viper but Discovery management (and the other promotions where she holds titles) were kind enough not to strip her of the gold. While she’s been healing up, both Viper and Nina Samuels have been staking claim to be the rightful challenger. Despite defeating Nina in two separate #1 contender matches, Viper won’t be getting her one on one shot as Sammii played a role in her second victory at the start of the month. Having clutched on to the title since November 2017, is Sammii’s time on top over?

Since writing this, it was revealed that the winner will defend against Discovery debutant Kris Wolf on November 4th. 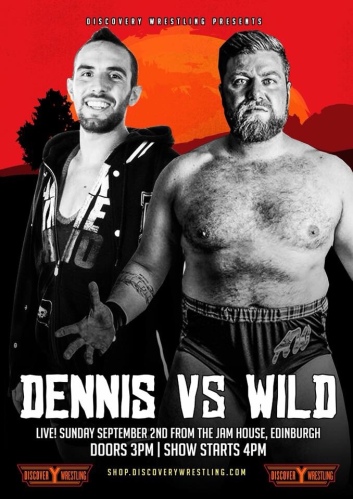 The other two quarterfinal matches in the Hotter Than Hell Edinburgh Invitational Tournament, the first of which will see Eddie Dennis make his Discovery debut taking on Andy Wild. Dennis has been making headlines recently for his exceptional rivalry against former FSU partner Mark Andrews in PROGRESS, with the pair facing off in a TLC Match at Wembley. A signing to NXT UK, he made his return from a torn pectoral muscle to continue showing he has Nothing to Prove. Here in Discovery, the man that’s been proving himself time and time again is Andy Wild. From winning the Disco Derby to facing massive names such as Bad Bones and Zack Gibson, the Unstoppable Englishman has been one of the top names on the Discovery roster throughout the year. A massive match between two big hosses of British wrestling.

The other quarterfinal will see a debut and a return as 2018 Drew Galloway Invitational Tournament winner Irving Garrett debut to face a man who made his return to wrestling after a year out with injury, Liam Thomson. The Bone Collector has had one hell of a year, from winning the tournament to challenging Kieran Kelly for the Scottish X Championship to debuting for ICW. A mighty fine wrestler. Liam Thomson made his surprise return to wrestling at a Wrestling Experience Scotland event, having spent the past 12 months on the shelf with an injury. Despite still being without a sink, The Bad Boy is still giving it his all. If he wins this tournament, maybe he can trade his guaranteed championship opportunity for a new one. I’m sure that’s possible to happen…

Michael Chase’s suspension is over but Discovery management aren’t giving him his roster spot back. Instead, he’ll face DCT with his spot on the line. Chase hasn’t exactly been seeing eye to eye with management for just under a year, starting when he feels as if the lumberjacks (namely DCT and Ravie Davie) were the reason for his loss to Christopher Saynt in December. He eliminated the pair of them from the Disco Derby and defeated Davie to retain his roster spot in May. His suspension came when he continued attacking Tom Fulton after their match in July. DCT hasn’t really gotten his hands on Chase since being eliminated from the Derby, and now he has the chance to do so and gain a spot on the Disco roster in the process! 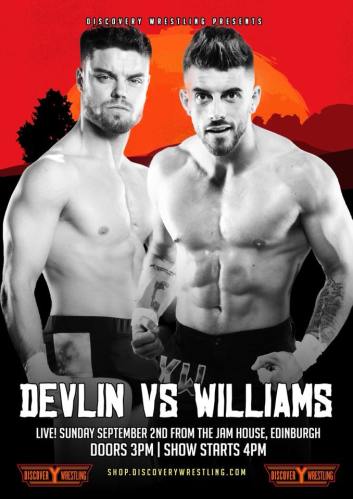 A battle between two of NXT UK’s best high flying stars face off as Jordan Devlin takes on Kenny Williams. Devlin made his long-awaited Discovery debut at the start of July in an unsuccessful attempt to take the Y Division Championship away from Joe Coffey, while Williams made his return on same show in a loss to Joe Hendry. Both men were part of this year’s United Kingdom Championship Tournament, and the latter was also featured on a recent edition of 205 Live. It’s one of those matches that isn’t about the story but rather just the wrestlers involved. You’ll be getting a fantastic match either way, and that’s a reason in itself to head along.

Another NXT UK showcase of sorts will see Isla Dawn return to face a woman making waves in the UK, the debuting Charlie Morgan. For the eagle eyed fans amongst you, you will have noticed Isla on a November 2017 Raw against Asuka where she was called Stacey Coates. Since then, she’s been added to NXT UK’s women’s roster and has been entered in to this year’s Mae Young Classic (which starts airing this Wednesday after NXT). Charlie Morgan is someone I wasn’t expecting to be added to NXT UK right away, so I was pleasantly surprised to see her pop up against Killer Kelly in the UK Championship Tournament. Like the previous match, this is a reason to be heading along. There won’t be much of a story but you’ll get a decent match.

A tag team match rounds out the card when The Kings of the North take on Polo Promotions. Bonesaw and Damien Corvin’s most recent appearance came in a loss to The Kings of Catch in July while Jackie Polo and Mark Coffey’s last appearance was in May when they defeated Shady Nattrass and Josh Terry. With the current state of Discovery’s tag team division, I wouldn’t say no to some Tag Team Championships being brought in at some time. Discovery love doing tournaments so perhaps that’s a way to introduce them. Another Uncivil War anyone? Also, The Kings of Catch have teased making an appearance so expect it to be in this match or in the Sammii Jayne match to officially bring The Kingdom of Catch to Discovery.

As expected, a stacked card from Discovery Wrestling. Two title matches, two tournament quarterfinal matches, a host of NXT UK talent (and one WOS star). Why are you not going to this?

Tickets are no longer available to buy online but you can still pay at the door, and you can also reserve your tickets by messaging the Discovery Facebook page. Doors open at 3pm, with the first bell an hour later.