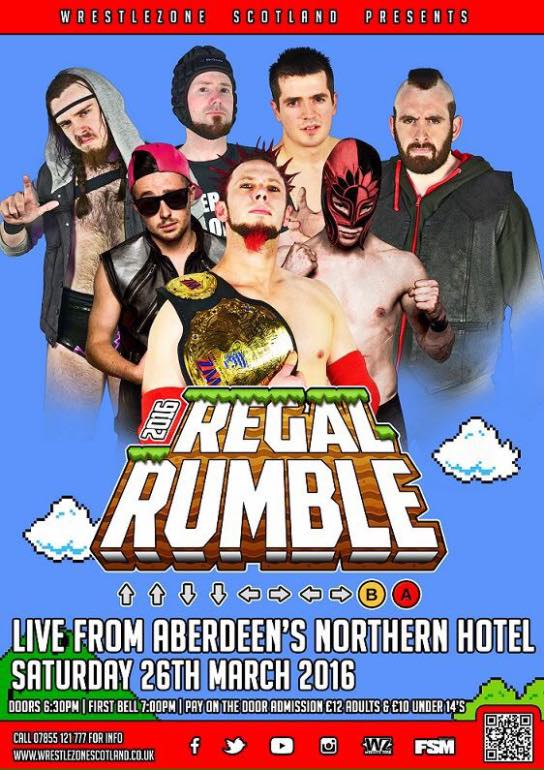 The Regal Rumble kicks off the Road to Anarchy with the winner of the main event going onto face the Undisputed Champion at WrestleZone’s biggest show of the year. The last three winners (Crusher Craib – 2013, Jack Jester – 2014, Scotty Swift – 2015) have went on to win the title in the Beach Ballroom so with that kind of win ratio, everyone will be out to be the last man standing.

The big news coming into this show is that another former WWE Superstar will be announced for Aberdeen Anarchy on June 4th. They are set to join Tatanka and Carlito in the Beach Ballroom. WrestleZone usually bring some of the best wrestlers from past and present so who knows who is on their way to the Granite City!

The matches on the night will certainly be ones to watch, especially the contest between Aspen Faith and Lewis Girvan. These two have been tearing it up every time they enter WrestleZone. Two of the most technically gifted in the country, they are sure to put on a wrestling clinic that will have those in attendance on the edge of their seats.

A big six man tag team match featuring the current Undisputed Champion, Scotty Swift, is sure to become a mass brawl if previous multiman matches at the Regal Rumble are anything to go by. The Champion teams with ‘The Creator of Carnage’ Crusher Craib and the Scottish Luchador Robbie Solar against a team of royalty, ‘The Greatest of All The Malices’ Lord Mr Malice, ‘Unstoppable’ Sir Andrew Wilde and ‘[My] Mother’s Favourite Wrestler’ Lou King Sharp. Five of these men are doing double duty with all but Swift entering the Regal Rumble later in the evening.

The WrestleZone Tag Team Championships are on the line when the current champions Mr P and Kaden Garrick take on the makeshift Sterling Oil unit of William Sterling and Shawn Johnson. Sterling and Johnson are very comfortable in the tag team environment with both members having held the titles on numerous occasions but not with each other. Paterson and Garrick are two time champions, the makeshift team are really coming into their own since their surprise title win last year.

Then there is the main event, the 20 man Regal Rumble is always filled with surprises. None more so than WrestleZone Academy Trainee Jimbo Bannon making his debut and in his first match he has the chance to go to the Beach Ballroom. We’ve put together the five favourites to win the match and move onto Aberdeen Anarchy as number one contender to the WrestleZone Undisputed Championship below. We know that Blue Thunder will be entering at #1 and Shawn Johnson is #20.

OSWtv’s Regal Rumble Top Five Picks
(Last year Scotty Swift was one of our Top Five Picks, so to say we’re always right is just a matter of statistics.)

Undoubtabley one of the best wrestlers on the WrestleZone roster, his track record in the Regal Rumble isn’t great, often only lasting seconds, but “The King of Catch” is on the cusp of greatness and a showdown between him and Scotty Swift would be a crowning moment of glory. He missed out on the number 20 spot thanks to Shawn Johnson but he has all the tools to get to the end and to win the match.

The veteran is always a top contender in whatever match he is in. Having recently drawn the ire of Sterling Oil after rejecting their advances, a win then onto the main event against another of Sterling Oil’s enemies, Scotty Swift, will stick in the craw of Richard R Russell. Johnny Lions and Scotty Swift have had a long standing rivalry since the early days of WrestleZone, what a way to settle it once and for all in front of over 1300 people in the Beach Ballroom. The last time Johnny Lions was in the main event at the Beach Ballroom he lost his Undisputed title to that years Regal Rumble winner, Crusher Craib, so to go to the main event of Aberdeen Anarchy as the challenger would bring his journey, since losing the title in 2013, full circle.

One of the biggest men in the Regal Rumble match, Andrew Wilde has made it clear that he is there to win it after coming so close last year, making it to the final three. He will have a 6 man match earlier in the night so he will need to conserve some energy in order to last the course in the Regal Rumble. He’s called ‘Unstoppable’ for a reason as it will take a lot of effort to eliminate Wilde.

The other biggest man in the match, two-time Regal Rumble winner Crusher Craib. Last year he was defending, and lost, the Undisputed Championship to Joe Coffey so ‘The Creator of Carnage’ will be out to reclaim what is his. He’s won this match multiple times, the only person to hold that distinction so the experience is there, coupled with being one of the biggest and strongest in the match it will take more than one person to eliminate Craib.

The One To Watch is making his second WrestleZone appearance but he’s another big guy with bags of experience. He won’t be easy to eliminate by any stretch.

Though they are strong in numbers, I think Sterling Oil have made far too many enemies to breeze through the Regal Rumble. They’ll try and use their numbers advantage and stand a good chance but my gut says that they’ll be left with no trophy at the end of the night.